Review for Medusa A Love Story by Sasha Summers 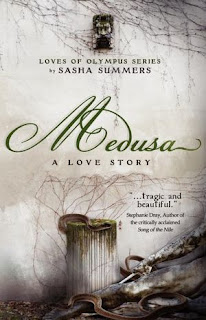 It's said love can change a person. Medusa wasn't always a monster...

Medusa is ruled by duty, to her Titan father and the Goddess Athena. She's no room for the tenderness her warrior guard, Ariston, stirs. When Olympus frees her from service, her heart leads her into the arms of the guard she loves... and curses her as the creature with serpent locks.

Ariston goes to war with a full heart... and dreadful foreboding. He learns too late of the danger Medusa faces, alone, and a Persian blade sends him into the Underworld. But death, curses, nor the wrath of the Gods will keep him from returning to her.

Courtesy of the movie Clash of the Titans, I always thought I knew all there was to know about Medusa.  Sasha Summers completely changed my original impressions with this intriguing story that is the start to a very promising new series putting a clever spin on classic mythological stories.  These stories take characters that appear to be heartless and above us mere mortals and humanizes them through stories full of love and tears.

Medusa starts out as a beautiful and loyal priestess to Athena, untouched by any man.  She never regretted not knowing a man's touch until she gets a new guard, Ariston who's just as loyal a warrior with his talents being war.  She longs for his touch and once she's set free by Athena, they act on their love.  Medusa was a carefree young girl never expecting anything bad to happen.  She was naive and her views were definitely through rose colored glasses.  When her and Ariston finally consummate their wedding vows it's a wondrous and enlightening event that is sweetly sexy.  Ariston is a noble man who never acted on his feelings until vows were spoken.  He's strong in battle and would do anything to keep Medusa safe.  He'd give his very life to be with her and bask in her love.  Their loyalty makes them a perfect couple and the strength of their love is like no other.  That's why it's particularly gutwrenching when the Gods step in and ruin their very lives by treating them like pieces on a chessboard.

Once the Gods take notice of their marriage, and because of battles between their own egos, they do everything they can to pull these steadfast lovers apart.  Their actions are truly callous and it actually gives them the title of villains in my opinion.  Thankfully some of the Gods value mortals and do what they can to right the wrongs done and lead us to a very satisfying conclusion.

With its unique spin on classic myths this story immediately captures your attention and through its seamless and highly emotional writing draws you in even further.  It's a clever and thought provoking premise that completely enthralled me and has me excited for future books.  Readers looking for something unique and unexpected should definitely give this book a try.

*I received a copy of this book from the author in exchange for my honest opinion.
at June 27, 2012