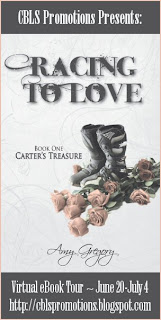 Competition between the sexes can sometimes lead to sexy encounters and with Racing to Love by Amy Gregory, that's exactly what happens.  So let's learn more about this book with a visit from Amy as well as an awesome excerpt.  Make sure to read all the way to the end of this post for a chance to win a copy of this book as well.  So let's get right to the fun......


I do a lot of things backwards from normal, why not write that way too?  A total self-proclaimed pantser, I don’t set off with a notebook full of well thought-out scenes, the beginning, middle and end all plotted out.  Here’s the kicker, I don’t even have my characters fully developed when I start out.  Racing to Love is a series, so I’ve got my leading men named and in each book the reader gets to hear their individual stories and follow their journeys as they find themselves running full speed into love.  Here’s a secret, in all four books, it’s a matter of love at first sight.

As I write I keep a notebook by my side.  When pertinent details come into play, I write it all down for future reference and I go back to typing.  I have a vision of what they look like physically, but that is about it.  Their fears, their goals, their personal dramas that have altered their views on life and love, well…I figure that out as I go along.

I tried to write the other way, tried to come up with the complete story line before actually writing in the meat of the story.  I cannot even begin to tell you what a mistake that was!  I couldn’t think, I couldn’t create, I was blank…so was the screen I was staring at!  So, I threw organization out the window and went back to my happy little world of discovering the story as I go along.  In doing so, book three of the series just flowed.  Start to finish, completely edited and submitted in less than three months.

So, the moral of the story is, as long as when your story is done, the last line of the last chapter is written, if you have fallen in love with your characters…so will your readers!  It doesn’t matter how they come to life, just as long as they do.  I hope my readers fall in love with Carter, Jesse, Eli and Alex like I have! 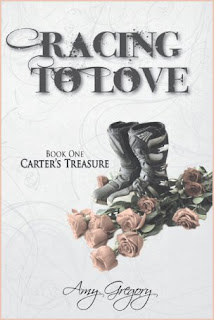 Racing to Love (Book One, Carter's Treasure) by Amy Gregory

From the outside, Molly West had everything, beauty, brains, and a career she’d retired from not once, but twice.  Being in the limelight and in a sport that was male driven, she was often surrounded men.  She ignored first the boys, and as she got older, the men.  Unfortunately, they were all the same, all after one thing, and she had absolutely no use for them.  Her cold shoulder and patented not a chance in hell look were usually enough to get her point across.  Occasionally, she had to resort to her sass—and her brother.

Molly had no plans in changing what was a perfectly good system. That is until she walked into the pits.  When she stood toe-to-toe with the sex in jeans, she knew right then and there that the man her adoptive mother always told her was out there, was now standing right in front of her.

Carter Sterling had traveled the racing circuit since he was a boy.  He’d heard all the old standbys, She’s out there somewhere, love comes along when you least expect it.  Good things come to those that… Yeah, he’d heard them all.  The last place he expected to meet the love of his life was on a pro track.  All she did was smile, and he knew, looking into her sapphire blue eyes, Molly West was his.  Forever.

If it was only that easy.  From the moment he laid eyes on her, he had a gripping feeling in him.  An overwhelming need to protect her.  A girl he’d just met.  Carter had learned a long time ago that gut feelings are almost never wrong.

Molly now held his heart in her hands, but it was going to take a lot more than just love to protect her from the past she thought she’d buried a long time ago.

They continued to walk back toward the pits, but he stopped when they were in the darkened hallway, just before they would have rounded the corner and been seen.

He was still holding her hand, but turned to face her as he placed his other hand on her waist. She sucked in a breath when he stepped forward. Her first instinct was to be anxious, to cower back, but something in those ice blue eyes told her she didn’t have to be afraid.

Those flip-flopping emotions were about to drive her crazy.

Now, in the dimmed corridor, Molly closed her eyes to catch her breath and to search for a decision. He’d been rubbing his thumb on her waist, but his movements stopped when her eyes dropped closed. The soothing strokes didn’t continue until she finally reopened her eyes and dragged her attention up his chest and past his Adam’s apple. She continued up until she locked her gaze with his. When she offered him a hesitant smile, he began stroking her again with a warm smile on his lips.

Staring down at her, he let go of her hand and skimmed the back of his over her cheek. She felt her heart thundering, her pulse racing when she ran her hands up his chest, feeling each and every rippled muscle. She’d never purposely touched a man like this before. Sure, she’d felt Brody’s muscles when she’d smacked him for one reason or another. Or when trying to push him off of her after he’d wrestled her to the ground being an ornery brother and all. But this? This was foreign.

Her eyes were back on her own fingers, taking everything in. She stopped at his heart and could feel it pounding hard beneath the soft cotton t-shirt.

“Just so you know…” he started in his slow, sexy voice.

She could tell he was waiting for eye contact again before continuing. “Yeah?” she whispered.

“I’m going to fall in love with you.” 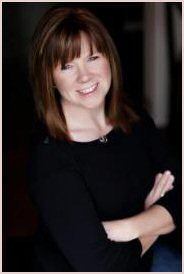 Amy Gregory leads an incredibly active lifestyle in Kansas City with her husband and their three fantastic kids who keep them running in three very different directions.  When she’s not rushing her oldest daughter to tumbling, her youngest daughter to music lessons, or sitting track-side watching her son practice motocross, she’s taking the few minutes in between to scribble the next pages in her Racing to Love series.

When asked, “When do you have time to write?” Amy Gregory giggles.  “In bits and pieces,” she says.

Amy is known for her snarky, off the cuff sense of humor, which you’ll find shining through in the characters she’s created.  Her debut novel, Racing to Love, Carter’s Treasure, is set for release June 7, 2012.

I’ve spent my whole life trying to figure out what I want to be when I grow up, and now I’ve finally found it. – Amy Gregory

Prize is an eBook copy of Racing to Love.

-Giveaway is OPEN TO EVERYONE!
-To be entered, just leave a comment, along with your email addy.
-Winner will be chosen using random.org and will have 48 hours to respond to my winner's confirmation email or a new winner will be chosen.
-Giveaway ends at 11:59 PM CST on 7/6.

*To learn more about this book and for more chances to win, you can visit the other blogs hosting this tour which are listed here.
at June 30, 2012