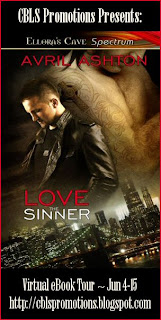 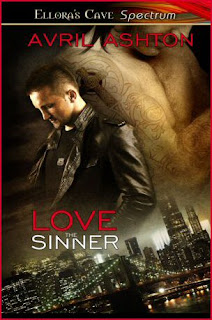 Love the Sinner by Avril Ashton

A notorious gang leader and an NYPD cop. An unlikely couple, but is it true what they say? Could Gabe hate the sin but love the sinner?

He trudged up the stairs to his house and fitted the key into the lock with frozen fingers. The instant he stepped through the door, the hairs on his nape shot up. He blinked in the darkness, keeping the lights off as he reached inside his coat pocket and grasped the cool butt of his SIG, his personal piece.

Standing with his back against the closed door, he waited, quieting his breathing. Nothing moved. Had he imagined the presence of someone else? He’d been on edge since the shooting—hell, even before that. Since I questioned him.

He wasn’t supposed to think about that. About him.

Gabe kept his grip on the SIG, not entirely convinced he was imagining things. Bending over, he placed the beer at his feet carefully, flicking on the light as he straightened.

No. Gabe gulped in a lungful of air. Angelo Pagan leaned against the archway leading into his living room, arms crossed, relaxed sensuality oozing from his every pore. Clad in head-to-toe black, the man looked like the sexiest freaking burglar ever.

Gabe’s feet were moving before he realized his intentions. Grabbing Pagan by the throat, he slammed him into the wall and pressed the gun under his chin.

“Why the fuck are you in my house?” The too-familiar musk of spice and heat hit his nose.

“Watch where you put that gun.”

Gabe’s knees weakened at the lazy drawl. The man he’d been trying so hard to forget was in his arms. He pulled off the black wool cap covering Pagan’s head and watched in starved fascination as long dark hair tumbled over his wide shoulders.

“Pagan.” Wincing at the hoarseness in his voice, Gabe cleared his throat. Long, curled lashes fluttered, lifted. Those expressive brown eyes met his and he bit the inside of his cheek.

One word and Gabe was back inside that interrogation room.

“Why are you here?” He ignored the needy cock twitching between his legs and kept hold of the gun with a not-so-steady grip.

Those eyes held him captive. He couldn’t look away, he didn’t want to even as the voice in the back of his mind demanded he run.

Pagan smiled and Gabe had no problems breaking eye contact then. He dropped his gaze to those lips curved just so and bit back a groan. God, the many times he’d lain awake next to Trish imagining ways to abuse those lips, that mouth.

He jerked his gaze back to Pagan’s eyes. Shit. Shouldn’t have.

“Six weeks is way too long, amado.” Pagan rocked into him, his arousal bumping Gabe’s.

Gabe closed his eyes on a hiss. Heat crawled up his spine. “Don’t. Don’t do this.”

His eyes flew open at the harsh command. Pagan stared him down, nostrils flared.

“You’re drinking too much.” Concern flashed across Pagan’s face before he smoothed it away. “You can’t numb it with alcohol.”

Jesus. Gabe’s eyes stung. “Why the hell are you here? Go away.” The gun he still held trembled violently.

“And why the fuck do you care?” Gabe shot back. “You tried to freaking kill me.”

“¡Idiota!” The fingers at Gabe’s neck tightened. “If I wanted you dead, you wouldn’t be breathing right now.” He jerked his chin toward Gabe’s wounded shoulder. “That bullet saved your life. I saved your life.”

“Listen to me, cop.” Pagan leaned forward, bringing their faces mere inches apart. “I need you alive. I need you breathing.” He took in a breath then let it out in a rush. “I need you.”

Gabe wanted to run as far away as he could from those eyes reflecting his needs back at him, but more than that he wanted to taste the man in his arms.

He wanted so bad and so fierce.

Gabe followed the slow movement of his own hand as he lowered the gun. He tucked it into the small of his back before meeting Pagan’s eyes. The cold air disappeared, replaced with flames licking at his skin.

“Pagan.” He growled the name as he shuffled closer. Pagan grabbed his lapels and pulled him in even tighter.

Gabe lifted a trembling hand and did what he’d wanted to from day one—he slid his fingers through Pagan’s thick hair. The soft strands wrapped around his fingers like silk.

Pagan shuddered. Gabe cupped his jaw. The short hairs of his stubble pricked his palm.

“I’m not…” He licked his lips. Pagan’s eyes dilated. “I’ve never…I’m not gay.” If he hadn’t been losing himself in those gold eyes he’d have missed their slight widening.

Pagan shifted away, out of his hold, and Gabe never felt emptier.

“Mierda.” Pagan shoved his fingers through his hair. “I…you…” Anguish bled from his eyes and roughened his voice. He turned away.

“You don’t want this, right? So let me go, cop.” Pagan’s gaze flicked down to where Gabe held him. “Let me go.”

Gabe swallowed. “I can’t.” He tightened his hold on the thick wrist. “I can’t.” The thought of watching Pagan walk away, of never seeing him again, punctured something in his chest. But what would be the result of him staying? Could he be with a man, this man?

“Qué quieres, Gabe? What do you want?”

His name on Pagan’s lips sounded so good. So right. Gabe looked at him, trying but failing to find words.

“Damn it, Gabe.” Pagan wrenched out of his hold and grabbed his shoulders. “Tell me what you want.”

“To kiss you.” The words tumbled from his lips, harsher than he intended. “Just once. To know what it’s like. What you taste like.”

“Maybe then I’ll be able to forget you.”

Pagan arched an eyebrow and stepped forward. “You think it’s that simple?”

“So do it.” They stood chest to chest. Pagan’s warm breath caressed Gabe’s forehead when he said softly, “Kiss me, cop. Then try to forget me.”

Gabe ached to punch him in the jaw, knock some sense into him. Some morals. Most of all he ached to touch the man, test the texture of those lips, and wasn’t that the most fucked-up thing of all? Before he stepped into this room his most pressing concern was how to react if Trish brought up marriage again, and now this.

Lusting over a criminal. Gabe pushed back his chair and got to his feet, spinning away in an attempt to hide the bulge in his jeans. He headed over to the door and opened it before turning to Pagan. “You can leave, but trust me when I tell you we will find the person responsible for this.”

Pagan got up, grabbing his sunglasses. He walked past Gabe, brushing up against him, body heat reaching out to scald him. Gabe hissed in a breath, schooling his features into a blank slate. His fingers twitched, itching to fist in the thick luxury of Pagan’s hair.

“I’d warn you not to take justice into your own hands, but I’m hoping you’ll try.”

Pagan stopped and met his gaze with a raised eyebrow.

“I want you to try something ’cause I’ll be there watching,” Gabe growled. “And I’ll get to lock your ass up. Take you off the streets finally.”

A slow smile spread over Pagan’s features, genuine and real, catching Gabe completely off guard. He fisted his hands at his body’s hungry reaction, glancing away before Pagan caught any signs of his attraction in his eyes.

Gabe turned back to him, watching as Pagan allowed his mask to slip for a second. There. Written behind those flashing gold eyes was the same heat. The same attraction.

Then he blinked and it was gone.

l always wanted to have a sexy bio, one to reflect who I am, but after drawing a blank, l could only come up with: I eat cake and I read books…ooh, and I write ‘em too. No one liked it and after massive peer-pressure and pouting, I managed something more…suitable?

A Caribbean transplant, Avril now lives in Brooklyn, N.Y with a tolerant Spousal Equivalent. Together they raise an eccentric daughter who loves reading and school (not so much school anymore). Avril’s earliest memories of reading revolve around discussing plot points of The Nancy Drew and The Hardy Boys with an equally book-minded mother

Always in love with the written word, Avril finally decided to do the writing in August of ’09 and never looked back. Spicy love scenes, delicious heroes, and wicked women burn up the pages of Avril’s stories, but there’ll always be a happy ending; Av remains a believer of love in all its forms.

Prize is a digital copy of Love the Sinner

-Giveaway is OPEN TO EVERYONE!
-To be entered, just leave a comment, along with your email addy.
-Winner will be chosen using random.org and will have 48 hours to respond to my winner's confirmation email or a new winner will be chosen.
-Giveaway ends at 11:59 PM CST on 6/11.
*To discover more about this book visit the other blogs hosting a spot on this tour here.
at June 04, 2012