Book Spotlight on The Checklist by Addie Woolridge (GIVEAWAY).....

A woman whose life is looking up finds things suddenly going awry when it comes to her love life and her parents in this entertaining rom-com that's the debut work of Ms. Woolridge.  Keep reading to get a tempting taste of The Checklist by Addie Woolridge, along with hearing more in-depth info about this book.  In honor of this multicultural contemporary romance make sure to fill out the form below for the chance to win a $20 Amazon GC along with a digital copy of this book! 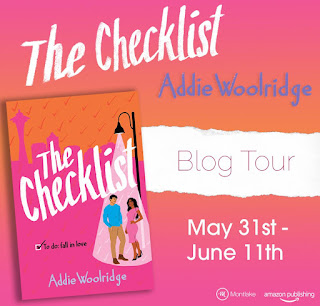 Hi, I’m Addie Woolridge, author of The Checklist. A bit about me—I am a classically trained opera singer with a deep devotion to glitter, coffee, Beyoncé, and The Rock. In my free time, I am also a marathon runner who is desperate to finish up the seven continents marathon challenge so that I can retire and go on vacations where running is not a requirement (just two races left, Sydney and Antarctica). I was born and raised outside of Seattle, WA, and although I now call Northern California my home, a piece of my heart will always be soggy in Seattle. That’s why I set my debut novel, The Checklist there!

The Checklist is a multicultural, contemporary rom-com that centers around Dylan Delacroix, a type-A, corporate consultant with a plan for her life. That plan includes making partner at her firm and purchasing a condo in Texas with her boyfriend. It does not include dealing with her bohemian family and their longstanding feud with their straight-laced neighbors. However, that plan is derailed when she accidentally upstages her temperamental boss. Banished by her boss, she is forced to return to Seattle on a career-killing assignment to try and revive a struggling tech company. Once she is home, she is immediately sent to negotiate a peace with the neighbors. Between her client, her fizzling relationship, and her family, it is hard enough for Dylan to stay on track, but when she finds herself falling for the neighbors’ son, Mike, sticking to the plan becomes near impossible. As pressure mounts, Dylan has to decide if she wants to keep checking things off of her list, or if she needs a new plan entirely.

I love Dylan so much, even when she is messy and uptight! While coming up with her, I was inspired by the idea of a fish out of water. I think a lot of people are expected to grow up to be like Dylan—responsible, competent, and predictable. I wanted to play with the idea that what many of us are told is “normal” behavior could be absolutely bizarre to someone else.

To write Dylan, I borrowed a few things from my life (take that terrible exes!). Like Dylan, I do make lists anytime I feel like things are getting a little chaotic, although I love colored markers and glitter, and Dylan would never sully a list with glitter. Both of us are Janet Jackson devotees—seriously, do not get me started on how much credit I think she deserves for normalizing female sexuality or we could be here all day. Also, both of us have perfected the OMG-this-is-bad smile. At this stage, my coworkers can spot “the smile” a mile away and know to ask what is wrong (or, maybe they know to hide from me?).

Unlike Dylan, I’m not named for a 60s folk singer (I actually have a family name and I love it). Nor do I have an awesome corporate wardrobe (I’m a skirts and dresses with pockets kind of girl). Similarly, none of our family dogs were as well behaved as Milo, who is not well behaved so that is saying something. Our family once had a German Shepherd who chewed up three couches when we weren’t home. Feathers were everywhere. That dog was so naughty and we loved her like she was made of gold.

The biggest thing that we have in common is that both of us have loving, albeit quirky families. My family is not composed of visual artists (with the exception of my Aunt Bob), but we are creative. Like Dylan’s family, my parents gave us a lot of freedom. We had one real rule, you had to be kind. Other than that, the rules were kind of a hodgepodge of different parenting philosophies. One of my favorite childhood “rules” came from the James Brown song, Hot Pants. My parents would frequently quote the lyric, “Never let anyone tell you how to wear your pants.” To them, it meant that no one in the family could tell you how to dress. It also meant that I wore overalls and Doc Martens at least three days a week throughout high school. Thanks, mom and dad.

To wrap it up, I hope that readers see a little bit of themselves and the people they love in this book. I also hope that readers get a break from the real world and fall in love with the Delacroix family, Mike, and Dylan—lists and all. 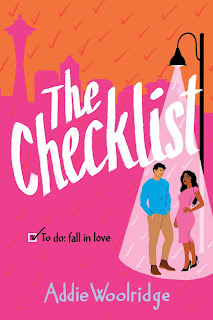 Things were going a little too well for Dylan Delacroix. After upstaging her boss on a big account, she gets dispatched to the last place she wants to be: her hometown, Seattle. There, she must use her superstar corporate-consulting skills to curb the worst impulses of an impossibly eccentric tech CEO—if she doesn’t, she’s fired.

The fun doesn’t stop there: Dylan must also negotiate a ceasefire in the endless war between her bohemian parents and the straitlaced neighbors. Adding to the chaos is a wilting relationship with her boyfriend and a blossoming attraction to the neighbors’ smoking-hot son.

Suddenly Dylan has a million checklists, each a mile long. As personal and professional pressures mount, she finds it harder and harder to stay on track. Having always relied on her ability to manage the world around her, Dylan’s going to need a new plan. She may be down, but she’s definitely not out. 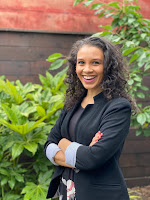 AUTHOR INFO:
Born and raised outside Seattle, Washington, Addie Woolridge is a classically trained opera singer with a degree in music from the University of Southern California, and she holds a master’s degree in public administration from Indiana University. Woolridge’s well-developed characters are a result of her love for diverse people, cultures, and experiences.
Woolridge currently lives in Northern California. When she isn’t writing or singing, Woolridge can be found baking; training for her sixth race in the Seven Continents Marathon Challenge; or taking advantage of the region’s signature beverage, wine.
WEBSITE  |  TWITTER  |  INSTAGRAM  |  GOODREADS AUTHOR PAGE
**********GIVEAWAY**********
a Rafflecopter giveaway
at June 03, 2021