Fans of rockstar romances will find themselves captivated and charmed by this couple and their attempts to keep their interactions strictly business.  Keep reading to get a tempting taste of The Study Date by Jessa Wilder, along with my impressions of it, then add this first installment in the Glasshouse series to your bookshelf! 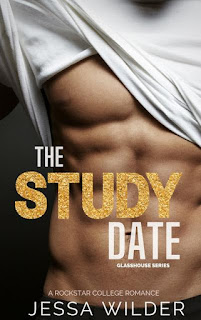 Breaking: the elusive @JaxRyder lead singer of @Glasshouse spotted getting cozy with a mystery brunette. Off the market?
Smart, driven, and always in control, Sidney King feels unstoppable. It’s her last semester of college and she isn’t letting anything get in the way of landing her dream job. Especially not the super hot, soon-to-be world famous rockstar she’s been forced to study with....No, definitely not him. No way.
Jax Rider is flying high. His chart-topping rock band is about to go off on their first major tour. Only one semester stands between him and the sweet freedom of the stage. The last thing he expects is the feisty brunette who crashes into his life.
They both have one rule: no attachments. Not when all their dreams are about to come true. This is strictly business. They’re study partners and nothing more.
FIND AT GOODREADS here.
BUY AT AMAZON here. 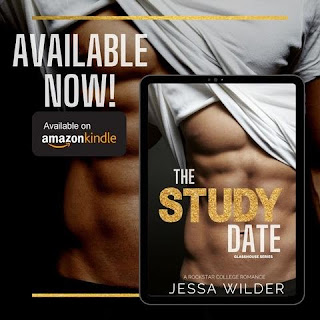 MY IMPRESSIONS OF THIS BOOK:
As a fan of rockstar romances I was immediately drawn to the premise of Ms. Wilder's debut work, a story that charmed me with its endearingly cute first meeting between the main couple and their captivating journey to HEA.  It's a journey that pulls readers in while showing unexpected sides to these characters, it allows for these two friends to become something more while they figure out more about themselves.  When it comes to rockstar romances there's a sense of familiarity amongst many of the storylines, but this story definitely sets itself apart from the rest courtesy of characters who aren't typical and a premise that goes in surprising directions.
Jaxson Ryder is a delicious hero, not your typical rockstar that's for sure as he's not overly comfortable being under a microscope, uncomfortable with living a life full of obligations.  When he first proposes to tutor Sidney, the offer is made from the goodness of his heart and isn't a way into her pants.  Jax is a truly good young man with a big heart who wants to help others.  Through his time with Sidney he becomes more comfortable in own skin as fame comes ever closer to him and as he tries to figure out a way to have it all.
Sidney King is one of the most appealing heroines I've discovered courtesy of her strong and sassy persona.  Her family life wasn't the best though and it kept her from opening up her heart fully to others, leading to a lot of frustrating push/pull between her and Jax as they evolved from friends to something deeper.  She's a formidable heroine as she knows what she wants for her life and refuses to settle for anything less.  She wasn't willing to be second best in any situation which made for some difficult times as this couple raced towards their destinies.  With each turn of the page though she became a tangible part of Jax's life, helping him embrace the rockstar persona while soaking up his sweet and kindhearted side.
On a whole this is an impressive debut work courtesy of an unforgettable couple and their sweet and endearing romance that built slowly.  Jax is a dreamy and drool-worthy hero with a big heart who often showed Sid just how important she was to him.  Though he made a few mistakes along the way, I still name him to my list of book boyfriends and still see him in my dreams.  Sidney is equally as memorable and I wish more heroines were as strong-willed as she, as determined as she showed herself to be throughout the story.  Alongside this memorable main couple was a cast of equally appealing secondary characters, mostly the remaining members of Glasshouse.  These characters weren't your typical rockstars, they too had big hearts that I can't wait to see more of as the glimpses we got of them here are quite tempting.  Readers looking for a fresh voice in the genre, a romantic tale full of heart and soul, will want to add this book to your shelves the moment it's released as it's a special and beautifully crafted story!
My rating for this is an A-
*I got this book from the author for review in exchange for my honest opinion.
AUTHOR INFO:
Jessa Wilder is a Canadian author of steamy contemporary romance. When she’s not writing, you can find her chasing around her 6 year old, walking her dog in the woods, or let’s be honest...She’s going to be reading.
WEBSITE  |  FACEBOOK  |  INSTAGRAM
at June 14, 2021