Book Tour for Beyond Retribution by Barbara Nolan (REVIEW)......

A badass biker and a stripper find themselves growing closer together while helping dig her out from under the danger currently weighing on her.  Keep reading to get a tempting taste of Beyond Retribution by Barbara Nolan, along with my impressions of it, then add this fifth installment in the Serpents MC Las Vegas series to your bookshelf! 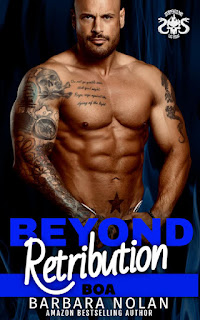 Boa, the Serpents cyber genius, never thought waiting on line for a hot and juicy in Mickey D’s would turn his life upside down—Until Madeline—The knockout stripper from the Shangri-La who had a rap sheet longer than Boa’s.
Madeline knows the hard punches life dishes out. She’s packed up her and her boys more than once searching for a better life. When she hit Vegas she had high hopes until a vengeful enemy from her past pops up, sending her life straight to hell.
Boa wants to be her hero, but she resists his help, saying it’s for his own good. Only he doesn’t buy it. She’s in deep with the wrong people, and even her tough, screw-you-attitude can’t disguise the fear in her eyes.
Fate keeps throwing them together, and after a night of crazy, out-of-control sex Boa vows to break down her walls and find out what’s under all her sass.
To keep Boa safe, Madeline denies her true feelings, packs up her family, and runs again to hide the wicked secrets of her past, but when her children are put at risk, she reaches out to the only man she can trust. Boa.
Can Boa save Madeline and her kids, or will Madeline’s need for retribution put them all in danger?
BUY here.

MY IMPRESSIONS OF THIS BOOK:
As a fan of MC-themed stories I found this to be an exhilarating read and a good addition to the Serpents MC Las Vegas series, a series that I've not read completely yet but have the previous books on my list to read next.  This book has many of the usual elements of an MC romance but also sets itself apart courtesy of a hero who's not at all typical and who I fell even more for with each turn of the page. Add in a nice balance of suspense and action in and out of the bedroom and you end up with a satisfying and well-crafted read.
Boa is a delicious hero from the very start as he's not your typical biker.  His past is full of angst, but not the usual kind of angst.  He came from a single parent family, a family where he ate to forget all his troubles and hid behind a computer screen as he had no real friends to bond with.  As a brother in the Serpents MC Las Vegas chapter he's honed his body into a strong and finely-tuned badass over the years and now uses his computer skills to help others.  He's clearly a tough guy but not afraid to show softer sides to himself throughout the story which drew me to him all the more.  Despite Madeline being a stripper he still treated her with respect and called out others who talked about her in derogatory terms too.  When interacting with her children he treated them as he wished he'd been treated as a child and subtly taught them to respect their mom too.  He's the epitome of a hero and was the highlight of this story for me.
Madeline was a tough as nails heroine, someone who embraces who she is and what she does for a living, while making a few jokes along the way.  Her life hasn't been easy though, and no matter what she tries to do right, things end up going wrong.  Right now she's in the middle of something bad, and though she thinks she can save herself, she'll need all the help she can get which will bring her and Boa even closer together.  From the moment these two met there was a combustible connection with witty and engaging banter.  They start off as friends before becoming so much more in a journey that has them becoming a family.
On a whole this was an entertaining story with a captivating romance.  Boa and Madeline were delightful to see grow closer and closer with interactions that were erotically-charged while bringing an occasional smile to my face.  Madeline's boys were entertaining too and I loved seeing them and Boa together, I enjoyed seeing the awe they felt for Boa and the mini-mes they became.  The other brothers rubbed me wrong a time or two, talked negatively about Madeline early on which tainted my feelings for them.  When push came to shove though they were there and it has me wanting to go back and read their stories.  Fans of MC-fueled romances will find themselves drawn to this story and its compelling main couple who are not what they seem.
My rating for this is a B+
*I got this book from the author for review in exchange for my honest opinion. 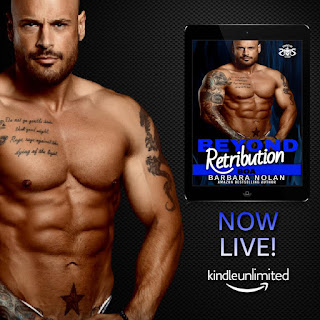 AUTHOR INFO:
Amazon Bestselling Author Barbara Nolan loves her emotional, passionate alpha males and the women who tame them. Her writing is sexy, spicy and seductive, and her goal is to have fun while taking the reader away from their world and into hers.
She is proud of this second act in her life and loves meeting and getting to know her readers, fans, and all the wonderful people in the writing community.
Her passion for reading and words make this a journey of love.
She considers reading a luxury and writing a necessity.
AMAZON AUTHOR PAGE  |  BOOKBUB  |  FACEBOOK  |  GOODREADS AUTHOR PAGE  |  INSTAGRAM  |  TWITTER  |  WEBSITE
at June 21, 2021