A captivating antihero finds his heart at war with his actions in this dark romance of accepting your past while making a future with each turn of the page tying me up in even more knots.  Keep reading to get a tempting taste of Thumper by Marie James, along with my impressions of this suspenseful and surprising tale, then add this seventeenth installment in the Cerberus MC series to your bookshelf! 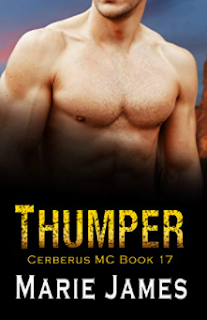 I’ve been many things in my life.
A liar.
A cheater.
A thief.
And I’ve never had a problem with any of it.
I knew my path, knew which direction I was heading when it was all over—straight to Satan’s lair. I accepted it, reveled in it, and always asked for more.
Nothing would change me, no one could sway me.
Or so I thought.
I knew I was a monster.
I just don’t know how to convince Cara Gibson that I’m her monster. 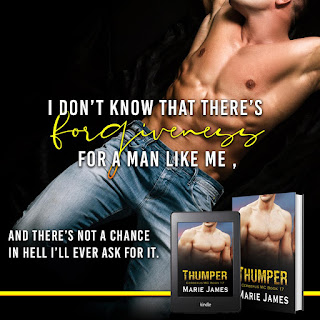 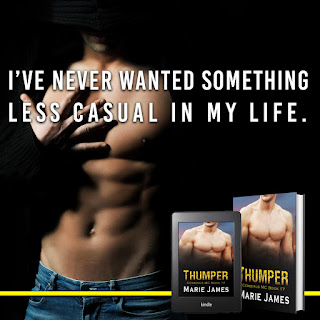 MY IMPRESSIONS OF THIS BOOK:
From the moment I started reading this book I knew it was going to be a tough journey full of unexpected twists and turns.  With a main hero whose actions made him hard to define, to a heroine who experienced so much pain, it all led to a captivating story that put me through an emotional wringer.  Though this book is part of a series it can be read on its own, but I think that reading everything that came before would give you greater insight into Javier "Thumper" Sosa and Cara Gibson as well as the darkness surrounding both of them.
Javier's a man who's lived a life of blood, damage, and dark deeds.  It's a life that he makes no excuses for, but all isn't what it seems when it comes to this man who has a hidden heart of gold.  As part of a sex trafficking ring Javier's seen numerous woman's lives changed, but seeing Cara changes everything for him.  Actions that he once undertook as part of his job now have him feeling like a prisoner, forced into deeds that now leave him feeling dirty.  As the story progresses though the truth about Javier becomes even clearer and readers will be left conflicted when it comes to their feelings for him.
Cara's definitely left conflicted by Javier as their attraction flares to life while she's locked in a cage with him the caretaker.  It's not the first time her life's been in the hands of another as she grew up in a cult where she was going to be forced into marriage at the age of 18.  Running away from one danger has ultimately led her to another, but through it all I was drawn to this tough as nails heroine.  She's withstood a lot and is ready to fight once again for the man who many would see as a villain, while she sees something more to him than what he shows the world.
In a story of second chances, making amends, and finding a future separate from your past comes this gritty read full of surprising twists and turns, a story full of unforgettable characters stuck in difficult situations that will keep you glued to the pages.  This story touches on some difficult and timely topics, making the connection between Cara and Javier a bit difficult to accept and believe in from time to time.  Some moments felt real and heartwarming whereas other moments had a Stockholm Syndrome vibe to their scenes.  Despite my feelings regarding their romance, I still found this a powerful read, a dark and gritty story that kept me on the edge of my seat.  After sixteen previous installments, Ms. James manages to take this series in a completely new direction.  From an antihero who you root for one moment while despising the next, to a group of secondary characters who have left a tempting and lasting impression on me as I eagerly await the next installment, Ms. James has crafted an exciting read that I highly recommend!  By the turn of the final page fans of MC-themed books will want to immerse themselves in the Cerberus MC courtesy of its larger-than-life characters, suspenseful storytelling, and storylines that will keep you guessing.
My rating for this is a B.
*I got this book from the author for review in exchange for my honest opinion. 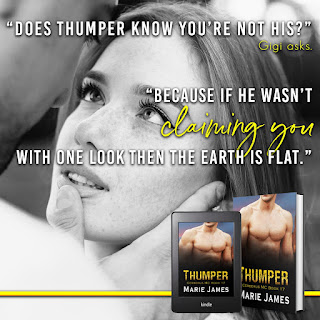 AUTHOR INFO:
Let's see...where to begin...
I'm inching up on the BIG 4-0. The gray hairs are doubling what seems like daily, and the wrinkles and laugh lines are more pronounced than ever.
I have an amazing husband (Married just over 15 years.)
We have two boys we're doing our best to raise as respectful gentlemen.
I have a master's degree in criminal justice which I used to work as a juvenile probation office until deciding to write full- time in June of 2019. So that means there's usually always some criminal/law element to my novels.
If I'm not writing; I'm reading.
My favorite genres recently are bully/reverse harem and enemies to lovers. Maybe I'm reliving my traumatic teen years through the girls who actually end up with the boys. (Not that I would change my history since it's gotten me exactly where I need to be!)
I love coffee. I miss carbs. Music is LIFE. I try not to be too serious.
FACEBOOK AUTHOR PAGE  |  TWITTER  |  BOOKBUB  |  INSTAGRAM  |  AMAZON AUTHOR PAGE  |  GOODREADS AUTHOR PAGE  |  NEWSLETTER  |  WEBSITE
at June 24, 2021