A man who lives by the law of frontier justice finds his life in danger when he sets out to find his friend at the request of the man's daughter.  Things take a dramatic turn once an attraction arises between the young lady and the man who's promised to find her father.  Keep reading to get a tempting taste of High Country Justice by Nik James, then add this historical western romance to your bookshelf.  In honor of this first installment in the Caleb Marlowe series make sure to fill out the form below for the chance to win 1 of 3 copies of this book too! 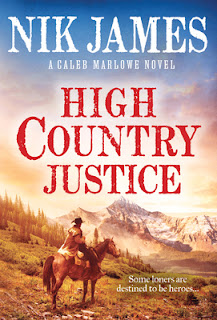 The first in a riveting new historical western series from author Nik James. It will take all this lone frontiersman's skills to save his only friend from murderous outlaws.
Caleb Marlowe carved out his own legend as a frontier scout and lawman before arriving in the Colorado boomtown of Elkhorn. Famous for a lightning-quick draw and nerves of steel, he is mysterious, guarded, and unpredictable. Now, he wants to leave the past behind. But the past has a way of dogging a man...
When Doc Burnett, Caleb's only friend in town, goes missing, his daughter Sheila comes seeking Caleb's help. Newly arrived from the East, she hotly condemns the bloody frontier justice of the rifle and the six-gun. But this is outlaw country.
Murderous road agents have Doc trapped in their mountain hideaway. To free Doc, Marlowe tracks his kidnappers through wild, uncharted territory, battling animals and bushwhackers. But when Sheila is captured by the ruthless gunhawks with a score to settle, Marlowe will have to take them down one by one, until no outlaw remains standing.
BUY LINK here. 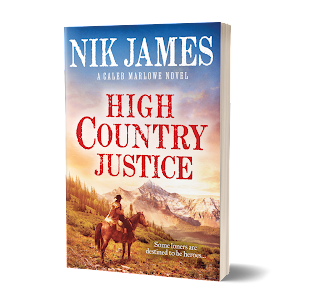