A single mom finds herself growing closer to the dom posing as her fake fiancée in this erotically charged contemporary romance.  Keep reading to get a tempting taste of Midnight Mystique by Anya Summers, then learn even more about this book by visiting the other sites hosting this tour.  In honor of this second installment in the Dungeon Singles Night series make sure to fill out the form below for the chance to win a $25 bookstore GC too! 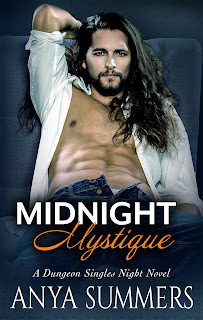 Dakota needs help. Badly.
The last thing she expects is for the Bad Boy of Eternal Eros to step in, sweep her off her feet, and offer his protection.
Maybe she accepts because they were matched up at the last singles night. Maybe it was the scorching passion she experienced at his skilled hands. Maybe it’s the way he dotes on her daughter.
All she knows is that the more the lines between reality and fantasy blur, the harder it will be to let him go. The more time he spends posing as her fake fiancé, the more she realizes she’s no longer faking her feelings. With every touch, every kiss, every heated glance, she realizes she wants more than one night. She wants the scarred bad boy’s heart to be hers for all time.
EXCERPT:
Ryker had dressed the part tonight, too, which was shocking and rather hot. She hadn’t realized that leather pants with a blue-green scale pattern existed. Combined with the gold belt, cross body gold armor over his bare chest covered in inky chest hair, a pair of fish fin forearm bands over his muscular arms, and a King of the Sea tall, gold pitchfork, the sinfully handsome Dom caused her nether region to purr in delight. The man was sex on a stick personified.
Dakota ignored her body’s response to the gorgeous alpha. He was the last Dom she would ever tangle with at the club.
In the Pit, a line of submissives formed. Dakota held the bin, laughing with each woman as she flushed or squealed with delight over her selection. Dakota was participating too. She had signed up before the events of the previous weekend. But given she was running the show tonight, she would select the last marker, whoever the Dom might be.
The line dwindled as the submissives headed to the scene area where the Dom would meet them after the selection process was complete.
Dakota noted the Doms who had been chosen as the markers disappeared. She had been hoping for the blond firefighter Cooper, or perhaps even Xavier or Colin. But she felt her good mood deflate as the activity wore on and the Doms she considered would be great to ease her dry spell were taken.
There were two markers left when Nora stepped up to make her choice: Rafael and Ryker.
Rafael was a strict Dom who liked doling out punishment. While he wasn’t Dakota’s first or even second choice, he would be preferable to the other one.
Nora, in her pretty pastel mermaid outfit, fished her hand around the empty bin with her eyes closed. The submissive’s breath caught as her hand closed around one marker and she drew it out. Before Nora opened her gaze, Dakota spied the name on the marker in her hand. Rafael.
Double damn.
That left her with Ryker.
She plunged her hand in and grabbed the marker, then glanced up from the pit to the surrounding crowd. Her gaze latched on to the Dom in question.
Dakota’s breath caught at the undercurrent that zapped between them. He cast her a sardonic grin. It was as if he knew she didn’t want to scene with him, and his gaze dared her to withdraw from participating.
BUY LINKS:  AMAZON  |  BN  |  KOBO  |  iBOOKS  |  UNIVERSAL
BUY THE OTHER BOOKS IN THE DUNGEON SINGLES NIGHT SERIES: MIDNIGHT MASQUERADE (BOOK #1)  |  MIDSUMMER NIGHT’S DREAM (BOOK #3)

AUTHOR INFO:
Born in St. Louis, Missouri, Anya grew up listening to Cardinals baseball and reading anything she could get her hands on. She remembers her mother saying if only she would read the right type of books instead binging her way through the romance aisles at the bookstore, she’d have been a doctor. While Anya never did get that doctorate, she graduated cum laude from the University of Missouri-St. Louis with an M.A. in History.
Anya is a bestselling and award-winning author published in multiple fiction genres. She also writes urban fantasy and paranormal romance under the name Maggie Mae Gallagher. A total geek at her core, when she is not writing, she adores attending the latest comic con or spending time with her family. She currently lives in the Midwest with her two furry felines.
WEBSITE  |  FACEBOOK  |  TWITTER  |  GOODREADS AUTHOR PAGE  |  AMAZON AUTHOR PAGE  |  BOOKBUB  |  INSTAGRAM
**********GIVEAWAY**********
a Rafflecopter giveaway
at June 07, 2021