Book Blitz for Hell Raising and Other Pastimes by Jayce Carter (GIVEAWAY).......

Readers will find this an exhilarating read full of unexpected twists and turns as a young woman tries to navigate her way through the Underworld.  Keep reading to get a tempting taste of Hell Raising and Other Pastimes by Jayce Carter, along with getting even more insight into this book by visiting the other sites hosting this tour, then add it to your bookshelf.  In honor of this second installment in the Grave Concerns series make sure to fill out the form below for the chance to win a $50 bookstore GC too! 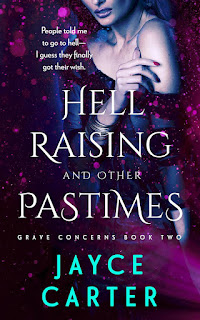 Lots of people have told me to go to hell—I guess they finally got their wish.
I’ve finally accepted the fact I might not be entirely human, so you’d think life could give me a minute. Instead, I find myself sucked into hell at Lucifer’s demand, and I realize death is even more complicated than my life was.
I’m still searching for how to stop the missing spirits before it’s too late, and with no suspects other than Lucifer, I have to survive hell—where everything wants to kill me—so I can confront the devil himself. Not even my love life can be simple, though. Troy is terrified of his werewolf side hurting me, Kase and Grant are lying to me, and Hunter is keeping his own secrets. I know better than to trust anyone, especially the men who have taken over my life.
Get to Lucifer’s Court, find out the truth about the missing spirits, figure out exactly what I am, and try not to die along the way. Oh, and don’t fall in love with the men who will for sure break my heart and possibly get me killed.
Easy enough, right?
EXCERPT:
Why was it that men walked out of quickies like some sort of victory lap, but women felt like we had whore tattooed across our foreheads?
Troy had already headed downstairs after dressing. He hadn’t said a lot, had regained a little of that distance he’d had before. I chalked that up to the awkwardness of the moment.
Besides, I had needed a moment to get myself ready. I’d cleaned up as best I could, using a tiny bit of the water Kase had left for me. No one wanted to walk while still sticky...
Still, as I went down the stairs, as all four sets of eyes swung toward me, I felt like each of them could see what I’d done.
They’ve all seen you naked. They’ve all been inside you. There isn’t much mystery.
My cheeks burned as I tucked my hair behind my ear and tried to look as if I didn’t care.
Men could screw everything that walked. Why not me?
No one spoke at first, and I had a moment of thinking everyone would pretend nothing happened. We didn’t need to address anything, right?
“So what did you think of a knot, shadow-girl? Always wanted to try it myself, but I’m a chicken.” Hunter paired the words with a grin so wide, he looked like some sort of jester.
So much for pretending...
BUY LINKS:  AMAZON  |  KOBO  |  BN  |  TOTALLY BOUND PUBLISHING

AUTHOR INFO:
Jayce Carter lives in Southern California with her husband and two spawns. She originally wanted to take over the world but realized that would require wearing pants. This led her to choosing writing, a completely pants-free occupation. She has a fear of heights yet rock climbs for fun and enjoys making up excuses for not going out and socializing.
INSTAGRAM  |  FACEBOOK  |  WEBSITE  |  BOOKBUB  |  AMAZON AUTHOR PAGE
**********GIVEAWAY**********
a Rafflecopter giveaway
at June 15, 2021