Readers will find themselves drawn to this emotionally intense m/m contemporary coming of age romance of bullies, to heartbreaking decisions, to traveling on a rocky road to growing up.  Keep reading to get a tempting taste of Good Boy by Megan Lowe, along with getting my impressions of this first installment in the Good Boy/Bad Boy Duet, then add it to your bookshelf! 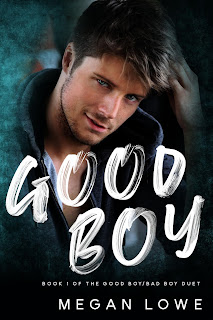 GOOD BOY (Book 1)
Connor Siddell is a good boy. He’s a nice guy, always wanting to see the best in people. So when he meets James on a dating app, things are looking up.
But when Connor inadvertently catches the attention of Windswept Academy’s resident bad boy, Cavanaugh McLaughlin, not everything is smooth sailing.
With James pushing Connor away, and Cav’s dislike hitting outrageous levels, is Connor’s good nature enough to keep him safe?
Is it enough to keep the good boy from going bad?
*Good Boy finishes on a cliffhanger.
FIND AT GOODREADS here.
BUY here. 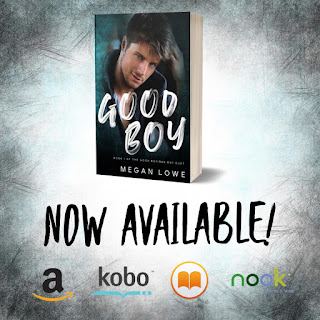 MY IMPRESSIONS OF THIS BOOK:
This was a tough read from the very first page, an angsty read full of poor decisions, misunderstandings, and all the usual difficulties of growing up.  What added even further to the angst of this story was Connor's open homosexuality, the hiding of other's sexuality, and all the heartbreaking decisions made that frustrated me one moment while pulling at my heartstrings the next.  And just when you think you know where things are going Ms. Lowe pulls no punches in her jaw on the floor cliffhanger ending.
Connor Siddell is in fact a good boy, someone with a kind and protective heart.  He's new in town after living through tragic events, trying to start over while living openly as a gay young man.  He luckily discovers someone to help ease his heart and soul on a dating app which leads to lots of romantic drama.  The one dark spot is Cavanaugh McLaughlin, fellow classmate who shows a lot of anger and hatred towards.  Though Connor doesn't understand what fuels Cav's rage, it definitely complicates things from the very start and ends up being just one piece to the cliffhanger ending.  Cav's a complicated character, one I didn't really care for at the start.  He's a Senator's son whose life is decided for him.  He's a popular bad boy with the tattoos to prove it while he commits deeds of bullying that made him occasionally unlikable.  There's a lot of pain hiding behind his hurtful behavior though, lots of stories about him, about his friends, and it all leads to inner conflicts about what he wants his life to be and who he wants to admit to being.  Things take a big turn for him once Connor discovers the truth about Cav and the attraction Cav feels for him.  It's a sizzling connection between them but one that doesn't go smoothly as Cav fights the truth of his feelings in a journey that broke my heart.
Cav and Con are a compelling main couple whose connection is put through the wringer in a tale that pulled at my heartstrings.  There was never a guaranteed HEA for these two as there was a lot of push/pull between them which left me on edge the entire time I saw them together.  Surrounding this larger than life main couple was a cast of intriguing secondary characters like Jase, Connor's brother who was loyal and loving, someone who becomes a surprisingly strong support to Cav as the story progresses. Cav's friend Thomas was someone who left me enraged as his supposed friendship often saw him being manipulative and hurtful while constantly getting between him and Connor.  His actions scared me and his presence ultimately fueled the painfully jaw-dropping ending.  I'm now left waiting for a resolution to that tragic cliffhanger, waiting in breathless anticipation to a powerful tale that packs an emotional wallop!
My rating for this is a B-
*I got this book from the author for review in exchange for my honest opinion. 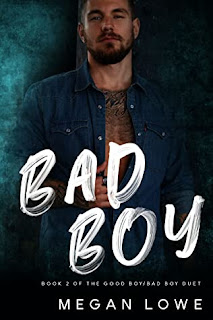 BAD BOY (Book 2)
-releases July 17th
Cavanugh McLaughlin is a bad boy. He’s tried to be the good boy, the good son, but it’s not him. Then Connor Siddell came into his world and changed everything.
For a chance to be with Connor, Cav is willing to change.
But in the wake of a life-threatening accident, Cav is forced to face his truths.
Is the accident enough to turn this bad boy good? Or is it too late, for both of them?
*Bad Boy is book two of the Good Boy/Bad Boy duet and must be read in order. Bad Boy contains a depiction of suicide.
FIND AT GOODREADS here. 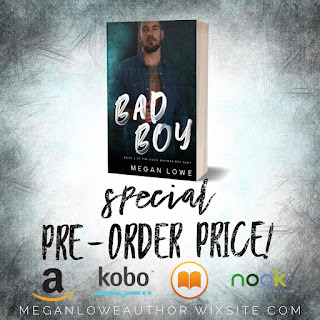 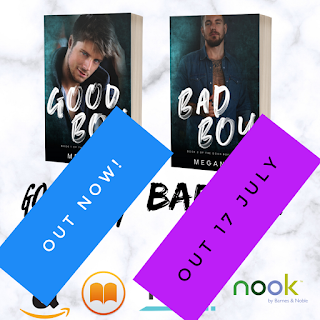 AUTHOR INFO:
As a lost Journalism graduate, I struggled to find a job in that field. When I started hearing characters talk to me, I decided to write them down. Those stories quickly became my life. I aim to write books with a spin on the traditional, or the usual.
Whether it's a spin on a well-loved trope, or a sport you may not be familiar with, I want to write it!
I write mainly mature YA (high school with all the good stuff!), New Adult, Contemporary, and MM romances, because we all need a bit of love!
I'm a total sports fan, avid reader, and excited traveller. Based in Australia, my heart belongs to New York.
You can find me either curled up, reading a book, yelling at the TV to get my boys home, or somewhere where no one knows my name!
WEBSITE  |  FACEBOOK  |  GOODREADS AUTHOR PAGE  |  AMAZON AUTHOR PAGE  |  NEWSLETTER  |  INSTAGRAM  |  BOOKBUB  |  TIKTOK  |  TWITTER
at June 26, 2021