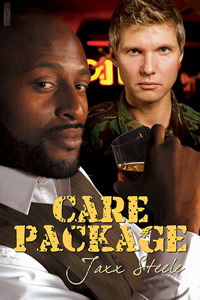 First Sergeant Dwayne Roman was asked to leave his life as a soldier. After suffering three years with regret and loneliness, he had the chance to get back what an unjust law and self-serving people took from him.


**********************
This is an intriguing m/m genre story revolving around the military that started out strong but got a bit lost along the way and definitely suffered for the shortened word count.  And while I found myself immersed in some parts of the story I never became fully invested in the relationship between Dwayne Roman and Jeremy.  Since they were separated for a large part of the story I never believed that they truly cared for one another which saddened me since there was such promise upon reading their early interactions.


Dwayne is a strong man who caved to blackmail and left the military, along with the young soldier he proclaimed to love.  For three years he could find out nothing about what happened to Jeremy and when he finally does find him Jeremy is nothing like he was before.  For all his importance I found it very hard to believe that he couldn't discover Jeremy's whereabouts much sooner.  He knows all sorts of secrets regarding other personnel's sexuality and yet couldn't find one soldier.  This strains all belief and made for a very large obstacle to overcome while reading.
As to Jeremy, we don't really know much about him.  I actually can't even remember his last name he left that little of an impression on me.  He appears very weak and submissive and goes along with everything that happens to him without a trace of anger.  After reuniting with Dwayne he shows virtually no emotion at being sent away without a word for three years and immediately goes back to having a sexual relationship with Dwayne.  His lack of emotions and strength was exasperating considering the high hopes I had for this story at the start.
This is not a bad book, just one that didn't live up to its full potential.  The premise is unique and brought to light the policy of "Don't Ask, Don't Tell" and flowed smoothly.  I'll definitely read more from this author since the small kernel of promise seen in this story's writing has me intrigued to see what the author can create in a longer format.

*I received this from the author in exchange for my honest opinion.
at September 13, 2011