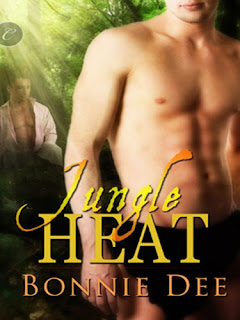 On a mission deep in the jungle, Oxford anthropologist James Litchfield comes face-to-face with a local legend: a wild man who wanders with mountain gorillas and lives as one of their own.

The chance encounter with the savage, whom James calls Michael, leads to a game of observation and exploration. Their mutual curiosity turns to an attraction—one that Michael has never experienced and James is desperate to deny.

When members of the expedition unearth James's secret discovery—a living specimen of man at his most primitive—Michael becomes a pawn in their quest for fame.

As their relationship deepens, James is compelled to protect Michael from the academics who would treat him as nothing more than a scientific acquisition and London society, which threatens to destroy their passionate bond.


***************************
Jungle Heat is an intriguing take on the Tarzan myth that brings out surprising depth from its characters and makes for a pleasant read that I was sad to see come to an end.  Along with a satisfying storyline comes lifelike descriptions.  Those of the jungle are so vivid that you can practically feel the humidity as are the images of London and its chaos.  These images draw you into the story and give an interesting perspective on what Michael is going through as he transitions to modern civilization.

The characters are not at all stereotypical.  Circumstances very much affect them and their actions.  James Litchfield starts out toeing the company line but once a real person is involved he becomes protective and secretive and that becomes the basis for his relationship with Michael, the Odd One.  Their relationship progresses realistically and I enjoyed seeing the caring side to James and their loving yet heated encounters.  I also enjoyed his relationship with his family and the issue of his sexual preference and how it related to the time period.  After keeping the truth about himself from everyone out of fear, it was nice to know that his family would always support him.


Michael is an amazing character and one of my favorites that I've read.  To see his progression from Ape Man to the latest curiosity is intriguing and heart-wrenching.  With so many of the story's characters only wanting what's best for them, I find it even more refreshing that the one character thought of as an animal is the most human.  He sees through subterfuge and doesn't believe in lies.  While I love that about his character, it certainly sets him up for heartache repeatedly.  After his parents died he was left alone, both physically and emotionally.  The apes were accepting of him at first but later cast him aside.  That was his first taste of being the Odd One.  Throughout the story he has other instances of being alone, even with James at his side.  By not being fully verbal and by not understanding human nature with all its cruelties he continually feels separate.  He just wants to live in peace surrounded by love.  As James became protective of him, I too felt protective and was rooting for him to get what he desired every step of the way.


James and Michael are truly wonderful together.  For the majority of the story James acts too much the protector, saying he knows what's best for Michael.  But when Michael's future is put in jeopardy, James finally listens to what Michael is saying which cements their relationship.  Not only are these two truly romantic with one another, their scenes are extremely hot too and I felt fully invested in their relationship.

Bonnie Dee has written a story that flows beautifully from the first sentence to the last with memorable characters inhabiting a well-known storyline.  She's added an intriguing twist to give it a more modern feel and in so doing has created a character not soon forgotten in Michael the Odd One.  This was the first book I've read of Ms. Dee's, but with her wonderful writing style and strong characters, it won't be the last time I pick up one of her books.

*I received this from Netgalley in exchange for my honest opinion.