Review for I Loved You First by Reena Jacobs 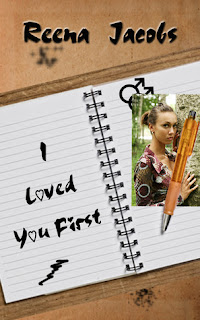 And you thought high school was tough?  In this YA story it's the first year of college that's rocky for two long-time friends.  For star athlete Seth it's the truth about his sexuality and the consequences of his forced 'coming out' that leads to a rift with his very best friend Alex.  For Alex it's her shadow-like existence and her deep love of Seth, even knowing the truth about him, that puts her life in turmoil.  Once all these truths come to light it's time for these young people to make some hard decisions and that's when the real heartache begins.

This is a highly emotional read full of characters being put through the wringer amongst an oftentimes unforgiving college culture.  For two friends who thought nothing could tear them apart, this story shows the slow dissolving of an intense friendship.  And at different times during the story this dissolution can be blamed on one and then the other.  Both of them are to blame and at times it makes them appear rather unlikable.

Seth, for all his popularity, still only has one true friend in Alex.  She's the only one who knows his secret and enables him to keep his secret by being the third-wheel on his dates with girls.  I feel that he takes advantage of her by keeping her close by him all the time, basically as a buffer to show that he's not gay.  He's limiting her experiences as well as his own by not accepting who he really is.  Once he's forced to confront the truth he's drags Alex down with him into the darkness.  He continues to play with her emotions to keep her close even when another guy expresses an interest in her.  Seth makes her choose, just like he does with every other aspect of their time together.  He's clearly the one in charge throughout the majority of their time together and I was continually angered by him.

Alex has been a loyal friend to Seth since the day she saved him from a bully when they were young.  She's loyal to a fault which has blinded her to certain truths about Seth.  He wants her all to himself, never letting her branch out on her own.  She's become comfortable as his other half because she's in love with him.  Even knowing he's gay she still holds out hope that he'll love her back.  Even when presented with a footballer named Dink who's the first boy to show her interest and kiss her, she still chooses Seth.  I became frustrated by her actions especially when Seth continually treated her shabbily.  I longed for her to break away from Seth and when she finally asserts herself, it's a moment that made me cheer.

There are intriguing secondary characters, some likable and some rather despicable.  Along with the aforementioned Dink who's sweet and caring but will never win Alex's heart, there's Alex's new friend Trinity.  Trinity is strong-willed and outspoken and exactly who Alex needs to find a way to stand on her own two feet.  She pushes Alex to be strong and is supportive, completely different from Seth's treatment of Alex and I wish there were more of her in the story.

Even though this was a hard book for me to read because of a character I found to be insensitive, I still found myself drawn in to this insulated collegiate world.  The trials and tribulations of growing up make me grateful that that time of my life has passed, but definitely made me feel for these characters and their struggles.  I might have felt frustrated at times by certain actions while reading, but by the end I realized that this was a journey well worth taking.

*I received this book from the author in exchange for my honest opinion.
at September 01, 2011

Email ThisBlogThis!Share to TwitterShare to FacebookShare to Pinterest
Labels: books, review, YA