Review for Take Me Down by Lauren Hawkeye 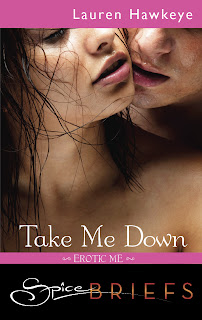 This short story is very intense from the moment the first page is turned and doesn't let up until the end.  There's very little backstory involved here and I mostly see this as one moment out of a woman's life.  It's a very important moment where a stuttering and introverted woman breaks out of her shell to experience what she's always wanted but been too afraid to go after.

The woman is Evie who's always felt inferior to her younger, more outgoing sister especially on this her wedding day.  Evie feels even more lacking since she feels that it should be her getting married first as the older sister.  Instead of a brand new husband she's left with a house full of annoying relatives.  The one guest she doesn't mind staying is her cousin's roommate Lucas, who virtually ignored her at their previous meeting.  He doesn't ignore her this time around though.

Evie is a very likable character with issues we've all experienced.  Throughout her life she's colored her hair and worn heavy make-up to make herself into someone she's not.  She's stuttered around everyone, including her family, out of fear.  Only around Lucas does she receive full acceptance of her plain looks which leads to the absence of her stuttering in his presence.  Seeing her unleash her inner sex goddess is wonderful to see and definitely what she deserves after years of feeling second best.

We never really learn much about Lucas.  His purpose is really to make her feel good and through his sweet words he's clearly the man of her dreams.  He's sexy, says all the right things, and their sexual interludes are smokin' hot.

*I received a copy of this from the author in exchange for my honest opinion.
at September 08, 2011