Psychic Abilities....Real or Not on The Mentalist

As a reader of paranormal romances I LOVE the idea of having psychic abilities.  These unique abilities can make life easier under the right circumstances.  On the tv show The Mentalist, during Season 3, Patrick appears to be able to communicate with horses as a ‘horse whisperer’, charm guilty culprits into spilling their secrets and help a hired burglar out of a holding cell in less than 24 hours.  Which of Patrick Jane’s skills would you most like to possess?  What would you do with that ability?

I'd love to be able to talk to animals.  My cat's been displaying some behavioral issues lately and I'd love to know why.  I spoil her like crazy so she shouldn't be angry about anything but I'd love to have the ability to reason with her and get her to stop the inappropriate behavior.  Then, if I got really good at talking to animals, I could get my own tv show and become famous.

Find out what other talents Patrick has and pre-order your copy of The Mentalist: The Complete Third Season on DVD here today: http://bit.ly/rcKZxk ! 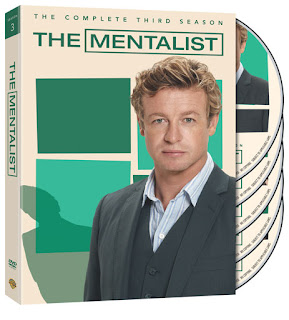 *I have been hired by Warner Bros. WBWord division to promote The Mentalist: The Complete Third Season on DVD.
at September 11, 2011