Review of Ardeur by Danielle Gavan.... 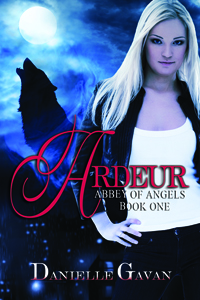 Sold by parents who wanted a normal child, Ardeur Lisle now hosts a demon and was trained to be a killer for hire. As an adult possessed, dreaming of escape and of a kind face from her childhood helps keep her sane.

If she breaks free from her captors, what will this new world full of paranormal beings hold for her? Ridding herself of her demon parasite will be her first priority.

Brody Callaghan never forgot the angelic blonde from his childhood. After years of military service, he swears to track down the face still haunting him from his youth.

But Brody has a furry secret of his own; one unveiled with each full moon. Will the two hold onto love with danger, deception, and an obsessed angel driving them apart?


*****************************
The premise of this book is one I found very original and, considering the extremely large cast of characters, is one that can be sustained throughout a number of books.  Ardeur presents an intriguing look into the world of angels and is entertaining and full of memorable characters whose future stories will make for interesting reading.  And while I found some issues within this book I still found some enjoyable moments and look forward to what Ms. Gavan has planned for the future of this series.

Ardeur Lisle has had a rough life from the moment she was born and an Angel of Death put a piece of his soul in her to save her life not knowing she was already a Necromancer.  Growing up talking to the dead and being possessed by spirits led her to being an outcast, never knowing love or affection, not even from her own parents who sold her into a demonic form of slavery.  The only bright spot being the sweet boy Brody Callaghan who became her defender before her 12 year nightmare of demonic possession and assassinations.  Once she escapes she finds shelter amongst angels and other paranormal creatures and is reunited with the one person she never thought to see again and never forgot.  But just when she and Brody find happiness, a crazed angel named Azrael who is the one who put his soul in her, claims her as his mate and she's once again plunged into a nightmare that only the power of love will save her from.

The character of Ardeur started out strong and I found myself admiring her resilience amidst a horrendous existence.  She was brave and sassy and had many qualities that I like from my favorite heroines.  Unfortunately, once she found love with Brody she lost some of those qualities and I didn't find her quite as enjoyable.  She was almost too lovey-dovey with Brody, especially after so many years of negative touch and emotions.  She seemed to fall too quickly into his arms and a sexual relationship considering how skittish she acted at first.  I never felt fully invested in their relationship because it seemed to happen so quickly once they reunited and both were too easily accepting of what they both are.  Also, the constant reassurances of love did wear thin after awhile.  Don't get me wrong, I love a happy ending, but the constant reassurances are what led me to see Ardeur as weak and made me not fully committed to her and Brody's relationship.

I enjoyed Brody's character but wish we could've seen more of him, especially where it concerned his werewolf side.  In his case the best was definitely saved for last.  His final battle with Azrael was exciting and showed a very alpha side to him that was lacking throughout the previous parts of the book.  There was also one or two major issues regarding him and his family that occurred off page that was very frustrating to me considering how important they were to him.

As I mentioned earlier, there are a lot of characters in this book.  At one point I had to write down all the new characters being introduced just to keep everyone straight.  Many came and went without much purpose but there were a few I hope to see more of in future books since a few of their storylines were left hanging.

The flow of this book started out very strong with intensely emotional scenes that drew me in.  The story became a bit flat in the center part and seemed to meander in its focus before racing to a rather rushed conclusion.  This rushed ending did a disservice to the character of Azrael who seemed to completely change in the blink of an eye which not only felt unrealistic but very manufactured.  So I'm happy to see his storyline will be continued.

This was a book that I found enjoyable and that kept my attention even through a slow middle section.  The Angelic world that we're introduced to in this book is full of promise and I know that I'll be there when the next book is released.

*This book was given to me by the author in exchange for my honest opinion.