Today's a big day here at the blog and across the internet because author Rachel Firasek has a new series entitled Curse of the Phoenix coming out TODAY with the novella The Last Rising being the first release!  To celebrate, Rachel is giving away books, cash, and a beautiful pendant.

**********INTERVIEW**********
Before we get to the two ways to win, Rachel Firasek introduces us to sexy Texan Turner Alcott.  He's here to tell us a bit about himself and the exotic woman Ice who saves his life in more ways than one.....
RF:  You travel a lot for you job, how does that affect your relationship with your son?


TA:  I won’t lie. It’s hard to keep all of my promises, but I do try. In a few years, I should be able to have enough money stashed to slow down. *he looks down* When we had Brodie, I never really imagined I’d be raising him alone.


TA:  She left. Couldn’t handle raising a son and she hated being left alone with him when I traveled. I don’t really like talking about her.

RF:  I’m sorry about that. Have you found someone else? Are you dating?


TA:  I’ve dated. Probably more than my share of women, but I’m ready to settle down again. I’ve found a woman I’m interested in, but I have to convince her to thaw out a little.

RF:  When you say you’re ready to settle down, I assume you mean marriage. Is that your goal?


TA:  Uh, marriage? I’m not sure about that, but I do want a long term relationship and if it develops into marriage, I’d be happy. I need someone that is okay with Brodie, my son, and the busy lifestyle we live.


RF:  So, can you give us a brief description of this woman?


TA:  She’s exotic. She has straight black hair, fair skin and the lightest eyes you’ve ever seen—well, at least in real life. She got a good figure, but it’s her scent that lures me. I’ve never smelled anyone who reminded me of momma’s laundry. I know that sounds bad, but it’s the scent of home. Sun dried sheets with a fresh clean scent. So good. 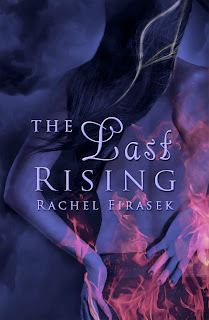 After paying two millennia’s penance to Osiris, world-weary Phoenix Ice has had enough. Saving souls without any hope for her own redemption isn’t how she imagined spending eternity. Fed up, she decides her next death will be her last. But when she sacrifices her own life for a sexy Texan in a catastrophic plane crash, she has no idea the consequences will be so great…or that she’ll end up back in his life for her next assignment.

Now that Turner Alcott has survived the worst, finding a wife and mother for his son matters more than ever before. When the mysterious Ice comes into his life, Turner knows she’s the one—but love is the last thing Ice wants. If he wants to win her heart, Turner must teach Ice how to forgive herself, and prove that love is the ultimate sacrifice.

“Why is it I can’t get you out of my mind? You say we haven’t met, but my dreams remember you.”

Oh yeah, he’d dreamt of a woman for months now. She resembled his dream woman in so many ways, but he’d never seen his fantasy lover’s face.

She struggled against his clutch. “Mr. Alcott, I assure you we haven’t met. And for your other question, I don’t know why, but you need to release me.”

Why did that quivering bottom lip make him suspect she was lying? Turner rested his forehead against the top of hers and sucked in her scent. “Please, tell me I’m not losing my mind. Tell me you don’t visit me every night and I’ll promise to leave you alone. I just need to know.”

He sounded like a crazy man but she had to tell him. She was the only one who could put a stop to his mind’s constant fantasizing, and this feeling of déjà vu every time he saw her.

Ice wriggled in his arms, her thighs chafing against his slacks. “Mr. Alcott, you need to let me go.” She glanced around his shoulder. “Brodie is probably staring out that glass window and I would hate for him to get the wrong impression.”

She was right. He needed to get ahold of himself, but he didn’t have the strength to walk away. His hands traveled up and over her shoulders, stalling on her neck. Brushing his thumbs against her jaw, he pressed her head back and stared into hard eyes—no emotion. Couldn’t she see the battle he fought?

He teased the corner of her mouth with his thumb and her breathy gasp pleased him. So, she wasn’t completely immune to him. He dropped his head until his mouth hovered over hers.

“Shhh. I just need a taste of the sunshine.”


#2....For a chance to win 1 of 3 copies of The Last Rising along with a chance for a goddess pendant please fill out this form.

Check out all the sites participating in the release day blitz!


Back of the Book Reviews
www.backofthebookreviews.com


Pearls Cast Before a McPig
http://mcpigpearls.blogspot.com/


Words of Wisdom from The Scarf Princess
http://wowfromthescarfprincess.blogspot.com/


Secrets of a Book Lover
http://secretsofabooklover.blogspot.com