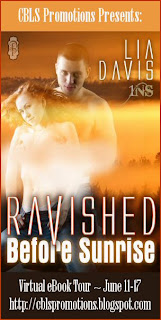 Today I present another installment of Decadent Publishing's 1 Night Stand series with a short story full of steamy encounters with a bit of the paranormal.  So get comfy and learn more about Ravished Before Sunrise as well as entering a giveaway....... 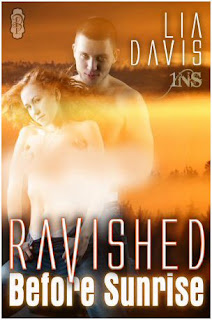 Ravished Before Sunrise by Lia Davis

Born with the unusual ability to see what truly lies in the shadows, Emalee Black is stuck between two worlds, the paranormal and the human. Neither one accepts or understands her and she’s forced to live a quiet, boring life in hiding. When her best friend mentions 1Night Stand dating service, Ema chooses a role-playing adventure straight out of her romantic fantasies. She’s to hunt her very own vampire and have her wicked way him.

Vampire Darian Wyman is surprised when his daughter signs him up for a one-night stand with an exclusive matchmaking agency. At first he’s appalled by the idea, but as he reads the details of the date, he becomes intrigued. For one night he will get away from the life he has long grown tired of to be hunted and captured by a would-be huntress. But he has plans of his own for his little vixen.

However, when Darian discovers the truth about Ema’s inhuman abilities, the date could end before it gets started.

Emalee’s pulse raced as she drummed her fingers on her desk and searched the website. A giddiness she hadn’t known since senior prom ran through her. The site claimed unlimited possibilities, a chance for adventure. Could they mean it? Because she’d already seen things beyond what humans deemed possible. Hell, her whole existence was unimaginable.

Her life had taken a lonesome turn when a friend she hadn’t seen since high school noted how much younger than the rest of her classmates she looked. Her long-lasting youth had become a liability. Drawing too much attention to her unusual gift wouldn’t prove wise. In some cases, it could get her killed. With no alternative, she’d closed the door on her life among humans and moved into the local witch coven, where everyone was different.

“What will you do?” Her best friend since preschool, a coven member in good standing, sat next to her for moral support and encouragement. Ema didn’t need much encouragement. The second Beth had mentioned a one-night stand, she’d been hooked. And Madame Eve’s dating service would save her from dying of boredom, at least for one night.

But could she go through with it? A wicked smile tugged at her lips and her inner voice said, “Hell, yeah.” Human strangers gave her a sense of safety. They knew nothing about her past or her unusual abilities.

Darian logged into his email account. An unusual message flashed in his inbox. Madame Eve with 1Night Stand. Why did that sound familiar?

A vague recollection of his daughter mentioning the dating service two weeks before came to mind and he growled. God, please tell me she didn’t. He skimmed through the email and snatched the phone from the desk.

“Hello, Father.” A sweet and cheerful female voice answered after one ring.

“Shopping. Is there a problem?”

“You know anything about why I would receive a message from 1Night Stand?” He tried to stay calm and not overreact. The email could be a mistake. Maybe Kat had nothing to do with it.

Fun? “Katrina, I didn’t request to be set up on a date. I can’t go meet a complete stranger and….” he scanned the email again. “…and spend the night with her?”

“Oh, Daddy, please. This is my gift to you. Now be the adult and have fun.” Her sweet tone did nothing to soothe his growing annoyance.

“I’m sick of you moping around the mansion. You need a change in your life. Besides, when was the last time you had sex?”

Lia Davis is a mother to two young adults and two very special, equally different kitty cats. She’s a wife to her soul mate, who drives her crazy during editing/revisions. She and her family live in Northeast Florida battling hurricanes and very humid summers. But it’s her home and she loves it!

An accounting major, Lia has always been a dreamer with a very activity imagination. The wheels in her head never stop. She only recently became serious about publishing her work and loves it more than she imagined. Writing is a stress reliever that allows her to go off in her corner of the house and enter into another world she created, leaving the day job where it belongs.

Her favorite things are spending time with family, traveling, reading, writing, chocolate, coffee, nature and hanging out with her kitties.

-To be entered, just leave a comment, along with your email addy.-To increase your chances of winning, comment on the other blogs hosting this tour and giveaway listed here.-Giveaway ends at 11:59 PM CST on 6/17.
at June 11, 2012