Review for The Druid Stone by Heidi Belleau & Violetta Vane 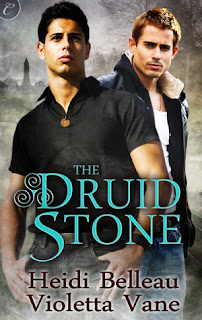 Sean never asked to be an O'Hara, and he didn't ask to be cursed by one either.

After inheriting a hexed druid stone from his great-grandfather, Sean starts reliving another man's torture and death...every single night. And only one person can help.

Cormac Kelly runs a paranormal investigation business and doesn't have time to deal with misinformed tourists like Sean. But Sean has real magic in his pocket, and even though Cormac is a descendant of legendary druids, he soon finds himself out of his depth...and not because Sean's the first man he's felt anything for in a long time.

The pair develop an unexpected and intensely sexual bond, but are threatened at every turn when Sean's case attracts the unwelcome attention of the mad sidhe lords of ancient Ireland. When Sean and Cormac are thrust backward in time to Ireland's violent history—and their own dark pasts—they must work together to escape the curse and save their fragile relationship.

The Druid Stone by Heidi Belleau and Violetta Vane offers more than just your average m/m read.  It also touches on facets of the paranormal, time travel, Irish history, and intense psychological issues.  Once you've read it, you'll never forget it and forever be drawn into the writing spell these two authors wove.

Sean O'Hara has lived a life full of nightmares ever since his great-grandfather left him a cursed druid stone.  He's soon reliving another man's torture and death every night and goes in search of the one person who can help him.  Cormac Kelly wants nothing to do with Sean at first thinking his plight is a joke.  It soon becomes apparent that Sean's nightly torture correlates to Cormac's past and that only by working together can the nightmares, and Cormac's guilt, come to an end.

The history of Ireland plays an important part in this story and the authors have made the images extremely vivid which easily immerses the reader in the action.  Modern-day Ireland also leaves a lasting impression as the small-town characters are larger-than-life and bring some much-needed humor to the seriousness of the storyline.  Cormac too provides flashes of humor which is greatly appreciated to deal with the life and death situation these characters are in.

Sean's life has been endlessly difficult.  In his younger years he fell into drugs and prostitution and just when he thought he'd gotten his life on track, the nightly torture began.  He longs to have someone beside him who can support him through the bad times, someone who accepts him for who he is.  Cormac too wants someone to accept him and discover that he's more than what his family line proclaims him to be.  These two lost souls, constantly being hurt by fate, are perfect together.  It's only when they're together that bits of happiness emerge.  The sexual encounters between them are equally intense and hot and finally occur after a slow build-up of sexual tension.  Their road to happiness is a rocky journey full of tears and sacrifice that keeps you on the edge of your seat as you root for them to succeed.

The Druid Stone is a follow-up to Cruce De Caminos, which showed Sean's downward spiral before getting clean along with his early brushes with the paranormal, and while it's not a necessity to read them together it does give a deeper insight into Sean and the lyrical feel to the world he's found himself in.  The writing style of Ms. Belleau and Ms. Vane is very distinctive and with its dream-like tone the reader is easily caught up in the world they've created.  There's much satisfaction to be found in this story, and with such a unique writing style, The Druid Stone is not soon forgotten.

*I received this book from the author in exchange for my honest opinion.
at August 19, 2012