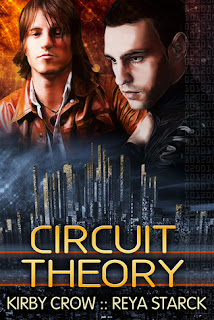 Dante and Byron are avatars. Driven by human beings, yet still only digital representations of their ideal selves. In reality, they live far apart, but share most of their waking and working hours together in a virtual world called Synth.

In Synth, like in most code, the laws are infinitely more simple and infinitely more complex. Navigating the system rules of virtual lovers is like steering through a minefield of deceit, suspicion, heartbreak, and half-truths.

Under pressure, Dante makes a friendship that trips Byron’s warning bells, disrupting their carefully-ordered lives and calling into question the wisdom of trusting your heart to a man you can never touch in the flesh.

Circuit Theory is by far one of the most unique books I've run across in a long time.  It takes place in the world of virtual reality and ends up giving an intriguing view of human interactions in the modern world and the difficulty of forming meaningful attachments.

Dante and Byron only interact in the virtual world of Synth and have what appears to be a good relationship.  But past hurts cause Byron to start driving Dante away and without Byron being willing to express his true feelings Dante starts feeling ever more frustrated.  Byron lets his past keep him from forming new attachments and questions every move Dante makes to be kind to others.  Dante can't help his outgoing nature though and as the story progresses there's a sense of an oncoming storm.  These two are happy in their virtual world for now, but the differences in their temperament have created some permanent hurts that can't keep being ignored in this well written story that has a happy for now ending.

The Synth world is vividly presented and all those feelings of inferiority amidst the haves and have nots in real life are clearly depicted in this virtual world as well.  It would be very easy to get drawn into this larger than life world, but it can also be harsh.  The depiction of the Synth world is my favorite part of the story, but I was left frustrated by what was happening in the real world.  I definitely expected these two characters to meet in real life and their reasons for not doing so aren't very believable nor quite clear.

Circuit Theory easily draws the reader in.  Even though it doesn't progress the way you expect, it's still a satisfying and thought provoking story about relationships in modern times and fans of the sci-fi genre will find it especially appealing.

*I received this book from the author in exchange for my honest opinion.
at August 06, 2012