Review for His Forbidden Submissive by Brandi Evans 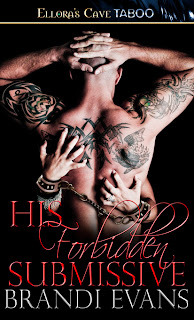 This is one smokin' hot book that brings together two very different people who bonded during a time of crisis and are now trying to make something permanent. In His Forbidden Submissive Brock has been the rock Vivian needed to get through her cancer treatments when her husband didn't have time. From that low point they're now hoping to meet each other on a more level playing field and let their real feelings come through while avoiding the pitfalls of keeping secrets.

Vivian's been through the wringer.  She's survived a cancer that was supposed to kill her and has an adulterous husband who only cares about her designing talents.  She's finally had enough and made a break to change her life and finally start living it the way she wants to.  I applaud her finally getting a backbone and could've cheered for "I am woman hear me roar" moment.  The only thing I didn't like about her was her tendency to jump to conclusions and assume Brock was like her despicable ex-husband.  Luckily she has a strong-willed friend, and extremely appealing secondary character, to quickly set her straight so that these silly misunderstandings don't go on too long.

There are a few secondary characters that left a lasting impression with me and have me hoping we'll see more of.  There's quite a bit of sadness these characters are trying to hide and that have me wishing for them to find happiness.  I've also never been a big fan of BDSM stories but I give credit to Ms. Evans for giving a good explanation for why people are drawn to the lifestyle as well as showing it in an enticing and tasteful way that had my heart pounding at times.  After the final page was turned I found this story to be immensely satisfying courtesy of two very appealing main characters who make a great couple.  I hope Ms. Evans continues with this series as I'm intrigued to revisit some of the worthy secondary characters and highly recommend it.

*I received this book from the author in exchange for my honest opinion.
at August 03, 2012