Review for Nightfall by Robyn Bachar 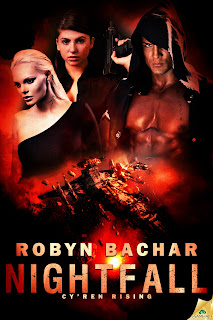 From the opening pages Nightfall promises to be one rollicking and action packed ride full of political intrigue.  What I didn't expect was how steamy it was as well.  All these factors combined to make for a memorable and entertaining read that is the first in Ms. Bachar's new series.

Tali grew up as a slave never knowing her true origins until the day she's saved and adopted.  She lives a quiet life until a wounded stranger enters her art gallery.  Tali is a strong-willed woman who's not afraid to embrace her girly side.  She easily fights beside the man sworn to protect her as it becomes apparent that her life is in jeopardy when her existence brings long buried secrets to life.  Dack is that wounded stranger who through a twist of genetic fate ends up mated to Tali.  Their connection is instantaneous and Dack treats her in a way she's unaccustomed to.  He's honorable and gives her a choice when her hormones won't.  I found him immensely likable and the perfect mate.  Carmen is the third member of this loving triad and is far from girly.  With her battle scars and commanding nature she brings an unexpected strength to this triad which is needed when Tali's life is on the line.  The relationship between these three is very sexy and equalizing when they're alone.  They each bring something to the triad that makes this relationship believable.

There are a few secondary characters that leave a lasting impression.  First and foremost is Jace, the arrogant soldier who enjoys political intrigue.  Even as he's trying to steal Tali away from Dack there's something appealing about him that has me excited to learn more about him in the future.  The secrets that come out at the end of the story promise all sorts of problems for those on the side of right and I'm very intrigued by the implications.

Nightfall is a super sexy read with lots of action and suspense and delivers much to fans of romance and sci-fi.  It's an exciting start to this intergalactic series and I'm greatly anticipating the next installment.

*I received this book from the author in exchange for my honest opinion.
at August 07, 2012