Review for Dust of My Wings by Carrie Ann Ryan 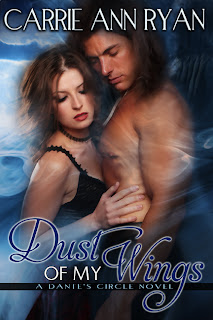 Humans aren’t as alone as they choose to believe. Every human possesses a trait of supernatural that lays dormant within their genetic make-up. Centuries of diluting and breeding have allowed humans to think they are alone and untouched by magic. But what happens when something changes?

Neat freak lab tech, Lily Banner lives her life as any ordinary human. She’s dedicated to her work and loves to hang out with her friends at Dante’s Circle, their local bar. When she discovers a strange blue dust at work she meets a handsome stranger holding secrets – and maybe her heart. But after a close call with a thunderstorm, she may not be as ordinary as she thinks.

Shade Griffin is a warrior angel sent to Earth to protect the supernaturals’ secrets. One problem, he can’t stop leaving dust in odd places around town. Now he has to find every ounce of his dust and keep the presence of the supernatural a secret. But after a close encounter with a sexy lab tech and a lightning quick connection, his millennia old loyalties may shift and he could lose more than just his wings in the chaos.

Dust of My Wings is an exciting read that presents angels in a whole new light (and there's not a harp to be seen) and holds great promise for future installments because of a sexy cast and intriguing genetic ramifications.  From start to finish this book was full of surprises and likable characters that kept me turning the pages for more.

Lily Banner started out as a quiet lab tech with OCD whose only fun was spending time with her friends at the bar, Dante's Circle.  Her life soon turns upside down when she's given a strange blue dust to analyze and her and her friends are struck by lightning.  She's soon feeling like a different woman, one who's addicted to milk and warrior angel Shade.  Her evolution, and her reactions to events, is very realistic and made her all the more likable for her calm acceptance.  When needed she also became a formidable fighter as those who are threatened by her changes, and those of her friends, came after her.  For a person who had no family before, recent events have introduced her to a whole new family who accept her as she is and start to teach her about herself.

Shade too has felt alone after the murder of his sister and his mate.  Until meeting Lily he kept his heart hidden.  The attraction between them though is instant and intense and his protective instincts have his heart at war with his mission.  As truths start coming out he and his best friend Ambrose discover a traitor in their ranks which creates suspenseful moments and a few action-packed sequences.  Throughout it all Shade is the quintessential hero.  He's sexy, supportive, and understanding of her quirks.  Their sexual interludes are steamy and he definitely caters to her.  As I said, he's the perfect hero.

There are many secondary characters that added excitement to this story and have me excited for future books in this series.  The most exciting of which is Ambrose, whose mate (Shade's sister) and family were murdered.  His heart's been closed off since, but he's now showing flashes of caring towards one of Lily's friends and I can't wait to see where things lead.  Lily's friends are a formidable bunch, protective of each other, and the changes about to befall them create an exciting premise for future installments.  Lastly is the sexy owner of the bar, Dante, who's not what he appears to be.  There's much mystery surrounding him and I look forward to his secrets being revealed.  You too will find yourself enamored of him.

This book was an exciting read that left me immensely satisfied.  It had the perfect balance between action and romance with a nice bit of suspense and political intrigue thrown in.  Fans of the paranormal will find much to like in this book and they'll want to continue the journey in the future with Ms. Ryan's romantically charged series.

*I received this book from the author in exchange for my honest opinion.
at August 20, 2012