Review for Her Wicked Ways by Darcy Burke 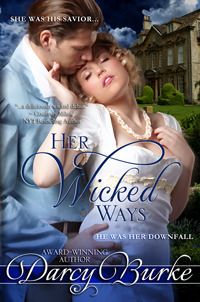 She was his savior

Banished from London for her reckless behavior, Lady Miranda Sinclair is robbed by a dashing highwayman en route to the country. By offering him a kiss in lieu of the jewels she had to leave behind, she commits the very type of act that caused her exile. When her dour guardians extend her punishment to performing charitable work at the local orphanage, she’s further tempted by the home’s owner, a provincial gentleman who stirs her passion in a most wicked way.

He was her downfall

Desperate to save his orphanage from financial catastrophe, Montgomery "Fox" Foxcroft leads a double life as a highwayman. The arrival of wealthy, well-connected Miranda, whose kiss he can’t forget, presents a lawful opportunity to increase his coffers. His problems seem solved—until she rejects his suit. Out of options and falling for the heiress, Fox must risk what principles he has left and take advantage of her wicked ways—even if it ruins them both.

Darcy Burke has created my favorite kind of story, that of opposites attracting, and made it even better by setting it in the world of the aristocracy in this romantic historical read that is the first book in a new series entitled Secrets and Scandals.  This story features two fully fleshed-out characters who, upon meeting each other, are profoundly affected and show a distinct change in their thoughts that make them better and happier people.

Miranda was on the path to self-destruction with her hoydenish ways and fear of familial embarrassment have her parents exiling her to the countryside to curb her wild tendencies.  At first she sees it as torture, but after spending time at the local orphanage and the man who runs it, her eyes become opened to how frivolous her life has been and she goes about changing her perception of herself and becomes a stronger more likable woman because of it.  While I was irritated by Miranda and her elitist attitude at the start, I found her evolution to a more understanding and compassionate person both believable and delightful.  Her change didn't happen overnight, it evolved slowly and through subtle ways.  Her relationship with the orphanage's owner, Montgomery Foxcroft, also progressed slowly and made for a more satisfying and believable ending as they both got to know each other in many little ways and through many different circumstances.

After his father squandered away the family money it's up to Montgomery Foxcroft to do whatever necessary to keep the orphanage his family has supported for centuries running, even if that means donning a mask and robbing from the rich.  Fox is a commendable man just wanting to do what's right and having to do things against his conscience to help those less fortunate.  He's sacrificed everything, his own comforts and future, to help his young charges and I couldn't help being drawn to him.  He's not conventionally handsome but his kindheartedness makes him so.  He's immediately drawn to Miranda and thinks her dowry would be the answer to all his problems, but again his conscience won't let him hurt her by compromising her.  As he gets to know the real her he falls more in love with her but knows her parents will never allow a marriage with someone of his low rank and that's a sad realization.

The relationship between the two of them was adversarial at first but then morphed into friendship and then romance.  Fox would do anything to have Miranda.  He tried to win her parents over by putting his best foot forward in an evening that was sadly hysterical and frustrating and showed how snobby her parents are and how uncaring they are of others.  Seeing how much Miranda's evolved from her parent's way of thinking gives hope to a future with Fox, but her wanting them to be proud of her keeps a barrier between them.  Only when she realizes that finding happiness and personal pride matters most will she truly break away from her parent's elitism.  The slow evolution of her and Fox's relationship allowed for a steamy build-up of sexual tension you could cut with a knife and some very sexy skin-on-skin action.

Surrounding this wonderful couple is a colorful and intriguing cast of secondary characters that add much enjoyment and intrigue to the story.  There's a bit of suspense too with a villainous miser determined to ruin Fox and his orphanage and an unexpected ally for Fox when he needs it most.  Miranda's interactions with the orphans and their plight, as well as cousin Beatrice and her outspoken criticism, helped mold her into a better woman and made her a more worthy match for Fox and I enjoyed their presence immensely.

This was an extremely entertaining story that is a wonderful start to what promises to be an immensely satisfying series.  With a truly likable couple that evolves into a supercouple surrounded by a cast of entertaining secondary characters, this is a story that completely sucks you in.  Miranda's brother Jasper Saxton has a big role in this story and knowing that he's featured next has me chewing at the bit to read his story as he too has suffered emotionally from their parent's coldness and I long for him to find a HEA.  Fans of the historical genre will definitely want to add this to their library and enjoy the nicely flowing writing style and delectable characters Ms. Burke has presented.

*I received this book from the author in exchange for my honest opinion.
at August 22, 2012