Review for To Seduce a Scoundrel by Darcy Burke 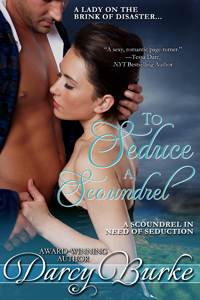 A LADY ON THE BRINK OF DISASTER
Quintessential debutante Lady Philippa Latham is determined to avoid scandal at all costs so that she may marry well. When her mother’s outrageous behavior threatens their family’s reputation, Philippa unwittingly follows her to a party no unmarried Society girl would risk attending. As if that wasn’t bad enough, Philippa is “rescued” from disaster by England’s most notorious scoundrel, which sets them both on a path to public and personal ruin.

A SCOUNDREL IN NEED OF SEDUCTION
Lord Ambrose Sevrin is infamous for ruining his brother’s fiancée and refusing to marry her. Content to remain among the fringe of the upper ten thousand, he is an intriguing enigma to London’s elite. Philippa thinks she’s met the true Ambrose—a gentleman who would fight to defend her and help her secure a husband before it’s too late. But he can’t be that husband, even for her. He won’t tolerate redemption—or love—for his crimes are far worse than anyone can imagine.

Darcy Burke's Secrets and Scandals series just keeps pulling me in more and more as we dig deeper into the lives of the entertaining cast of characters she's created.  A character will be introduced that leaves a profound affect on me and then they'll be featured in the next book and make me fall in love with them even more.  Such is the case with Lord Sevrin who ruined his brother's fiancee and was there when his brother died.  The Ton has shunned him since then while being infatuated with his notoriety.  No one knows what really happened though and they certainly don't know the real Sevrin.  One moment changes all that and Sevrin soon has to show another side of his character and do everything he can to save the reputation of Lady Philippa.

Sevrin made this book for me!  I was drawn to every aspect of him and ached for every hurt he endured.  Ever since his brother's death he's felt responsible and the guilt has weighed on him to where he's gone out of his way to punish himself.  He's denied himself every happiness and I cheered when Philippa came into his life.  He thinks he's unworthy and incapable of loving and in so many subtle ways he showed the complete opposite when with Philippa and it brought a tear to my eye.  He's a charming man and oozed sex appeal and I too drooled whenever his shirt was off just like Philippa.

Philippa was the woman Saxton was to marry in the previous book before she denied him and what a great decision that was!  Her and Sevrin are amazing together and their relationship was one of healing for him.  She's a strong and caring woman, one unwilling to believe gossip.  For her, actions speak louder than words.  She's not afraid to go after what she wants and she wants love in her marriage.  After the coldness of her parent's marriage and their coldness towards her it's no wonder she wants love from someone else.  The slow build-up of romance and affection between her and Sevrin was satisfying and believable and resulted in a cheer-inducing conclusion, not to mention the super steamy sexual interludes.

To Seduce a Scoundrel is yet another winning entry in Ms. Burke's Secrets and Scandals series.  The characters are amazing and it's easy to immerse yourself in their lives.  There are many secondary characters that have me intrigued and dying to know more about, particularly Lockwood whose illicit party set Philippa and Sevrin on their path to happiness.  The other is fight promoter Jagger who continues to be a thorn in Sevrin's side but utterly fascinates me, as does Lockwood, through their mysteriousness and outer and inner scars that briefly show through.

This is a wonderful story and series reminiscent of the works of Lorraine Heath and Elizabeth Hoyt and I highly recommend it to not only fans of historical romance but romance in general.  It's wholeheartedly satisfying and enriching and I can't say enough good things about what Ms. Burke has created here.

*I received this book from the author in exchange for my honest opinion.
at August 24, 2012