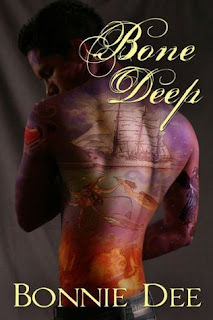 In the fall of 1946, grieving war widow Sarah goes to the carnival with her friends and is riveted by the tattooed man in the freak show, sporting head to toe body art. Later she discovers him hiding in her hayloft, escaped from virtual imprisonment since childhood by the carnival's evil owner. She shelters him on her farm, fighting a powerful sexual attraction while learning about his mysterious past and gentle nature. When a local child goes missing, Tom uses his psychic gifts to locate her, but his assistance in the case doesn't allay the town's mistrust of such an exotic stranger in their midst. Small-town prejudice tears the lovers apart and a very real threat from carnival owner Art Reed endangers them. Can they rise above obstacles of fear and hate to create the family both have always craved?

I've read a few of Bonnie Dee's other books and have always admired her unique main characters that are less-than-perfect in the eyes of others but are amongst some of my favorites and extremely memorable.  Bone Deep continues in that vein by presenting a young man with unique psychic talents whose body is forced into being an artistic canvas and put on display in a traveling circus.  Tom has never been away from the circus and is kept uneducated by the smarmy circus owner so as to keep him dependent on him, until the night a dream sends him on a search for love and family.

Widower Sarah has lived her life in a bubble of routine and loneliness.  A chance encounter at the circus leads to a momentous change, not only for her but for those around her as a mysterious man brings love and happiness to her life once again.  Sarah is a strong woman stuck in the throes of sadness thinking her life is over.  Everyday she's just going through the motions until Tom comes and gives her a chance at happiness.  With him she lets loose and will fight for him no matter what it takes or against who.  I admired her resilience in the face of the town's prejudice and was happy Tom had her standing up for him and his rights.
Tom had a profound affect on me and was a well-written character but I wish we'd gotten a deeper look into his psyche considering everything he'd gone through in life thus far.  The tattoos on his body told a much bigger story with many of the images a reflection of his life.  These images spoke louder as to Tom's inner thoughts than he himself did.  He was a gentle soul but willing to fight for the woman he's come to love.  Unfortunately the town's prejudices towards his psychic talents and to his looks led to him and Sarah constantly fighting for their right to be happy together.  These small town prejudices were expected, albeit stereotypical, and provided the majority of conflict to this couple's HEA.

The time period for this story is one not seen very often and I thoroughly enjoyed the look and feel of Sarah's world.  The lack of modern-day technology added to the small town feel and helped immerse me into the story.  The only problem I had with the story was the rather out-of-the-blue ending.  The villain's reasoning and actions felt tacked-on and a bit over-the-top.  The purpose seemed to be to make Tom and Sarah more sympathetic to those townspeople who had been the cruelest and to get them to admit their love for each other and finally grab on to their future together.

Barring this, I fully enjoyed Bone Deep from start to finish and the larger-than-life character of Tom.  The sexual interludes were extremely sexy and progressed believably from their initial meeting.  With its vivid atmospheric feel and intense emotions this book has me wanting to read more from Ms. Dee while savoring what Bone Deep has to offer.  Those readers looking for an exceptionally unique character in a distinctive setting need look no further than this memorable read from Ms. Dee.

*I purchased this book for my own personal library.
at August 30, 2012