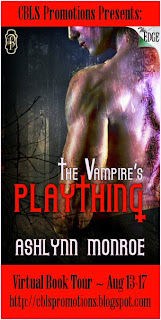 I'm a huge fan of vampire stories and can never get enough of them.  Ashlynn Monroe has a new and sexy vampire book she recently unleashed on all us vampire fanatics entitled The Vampire's Plaything.  Today you'll get a taste of this book as well as the chance to win a copy.  So read on...... 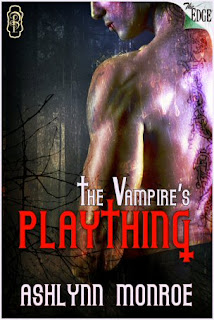 The Vampire's Plaything by Ashlynn Monroe

What would you do if you found yourself helpless and vulnerable for the most attractive man you’d ever seen?

Zoe finds herself a naked captive of a vampire and impossible memories of two men surface in her mind. Passion overcomes her as the long suppressed need for these men turned monster’s touch rekindles something from another time inside her, and makes her a willing plaything for these dangerous but sexy creatures.

He spun her roughly to face the wall. Pushing her against the cold stone, his hands became gentle, caressing her back. From her shoulders to the flare of her hips, her skin came alive under his touch. The twisted chains held her arms higher. She jumped at a sharp, stinging slap on her bare ass. The contact had been anything but tender.

“I just hurt you. Now are you afraid?”

He slapped her again in the same spot. It stung. Zoe whimpered, but the desperate lust grew hotter.

“Do you believe in second chances?” he whispered, his breath cool on her ear.

“Everyone deserves one,” she replied.

He made an angry sound. She turned, untwisting her chains. Zoe watched him step away. His back was to her. She could see the sinew and muscle. His skin was taut. She longed to run her hands down his body. There was a sorrow in his posture. He slouched a bit. Zoe imagined the man didn’t let just anyone see him with his guard down.

“Not everyone,” he muttered, his shoulders slumped.

“Why do I feel like this?” Why did he feel so familiar? She’d never felt so comfortable naked with another person. He faced her again. A deep frown marred his features. She ached for him, for the sadness that hung over him like a cloud heavy with rain. The strange emotions she felt for him, were like echoes of a past she couldn’t remember.

He faced her again, torment in his expression. Sighing, he opened his mouth as if to speak, revealing sharp fangs the color of old ivory, but she wasn’t afraid.

“You are the most dangerous creature on this Earth. I should destroy you. You could destroy me.” His dark eyes narrowing, he ran the pad of his thumb down her cheek.

Ashlynn Monroe has been dreaming up stories all her life. She started to put them on paper at thirteen, but it wasn’t until she was thirty that she decided to share them with others. She’s a busy mom with a full time job, fantastic friends, and a unique sense of humor. She’s just a regular girl who’s in love with the idea of happily-ever-after. She’s honored to be multi-published by some of the best electronic publishers in the industry. Ashlynn survives each day by dreaming up her next tale of romance.