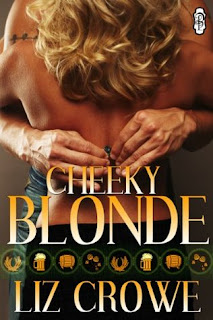 Violence, intrigue, and passion are brewing in the craft beer world. When bitter rivals Jennifer Baxter and Sean Garrison meet, the notorious and handsome owner of Garrison Brothers Brewing stays true to form, seducing his rival at a national brewer’s convention.

Sean arrived at the convention expecting to get down to business, including his stated goal of hiring Jen away from Brick Street Brewery. But the beautiful fellow craft beer expert provides more of a distraction than he expected.

When sabotage strikes their fellow breweries, they unite to solve the mysteries. But fate and rumors brew more than beer as love, lust, jealousy, and misunderstanding collide in a way neither could have expected or anticipated.

Can they overcome the malicious chatter long enough to explore the emotion bubbling beneath the surface? Or will lust fall flat and leave them nothing but memories of the moment that slipped away?

In Cheeky Blonde, author Liz Crowe not only knows about beer but also gives a good and sexy dose of sexual tension amidst a bit of suspense.  Who knew the beer world could be this sexy and exciting!

For Jennifer and her brewing partner/sex buddy Dylan a weekend brew convention was just supposed to be about business.  But the moment Jennifer locked eyes with fellow brew master, and notorious sexual god, Sean the weekend becomes so much more as Jennifer fights her attraction to Sean while he presents a plan to buy out her company.  From there on it's a battle to keep their hormones under control while a psycho sets their sights on destroying other breweries and laying the blame on Jennifer.

Jennifer is a strong and likable character who always knew her relationship with business partner Dylan wasn't about romance.  Seeing her interactions with Sean, and the sexual tension that crackles between them, makes it obvious who the better man is when it comes to romance.  Her hormones are in a constant turmoil around him and it's fiery once they finally hit the sheets.  Sean has quite the womanizing reputation which it turns out isn't very true and his immediate protectiveness of Jennifer shows that it's not just about sex with her.  I found him to be very sexy and gobbled up the pages whenever he was present.  The sexual tension between him and Jennifer started out intense and then morphed into a slow burn to finally become one night of off the charts hot.  Their relationship was immensely satisfying start to finish.

There were also some very exciting secondary characters.  The first of which is Dylan, who finally has to accept that he and Jennifer will only ever be friends.  He's immensely intriguing and though he appears to be happy at the conclusion I'd still love to see him have his own story since I don't feel he's found his true happily ever after.  Dylan's bi-sexual brother Liam also left a lasting impression, and with Jennifer telling her brother Cam about him, I sense another possible happy ending in the future.

Liz Crowe's knowledge of brewing is obvious and she seamlessly incorporated this knowledge into the story not overwhelming the reader.  The only aspect disappointing was the identity of the psycho and their reasons behind committing their crimes.  It was plainly obvious and a bit melodramatic and the denouement felt a bit silly and rushed.

All in all this was an immensely satisfying story with likable characters and steamy sexual interludes.  There's many stories left to tell in the world Liz Crowe has created and I look forward to another installment set in this sexy and exciting world of microbreweries.

*I received this book from the author in exchange for my honest opinion.
at August 08, 2012