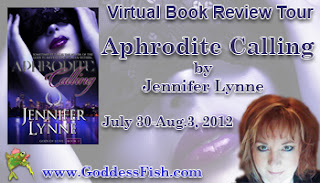 Jennifer Lynne's Gods of Love are back in her latest release Aphrodite Calling, a tale featuring a very unique couple experiencing a night full of steamy encounters and new discoveries of themselves and what they need to achieve happiness.  Today I bring you a glimpse of this truly unique book and give you the opportunity to win a great prize just for joining in the conversation about this one of a kind story.  So let's get this party started...... 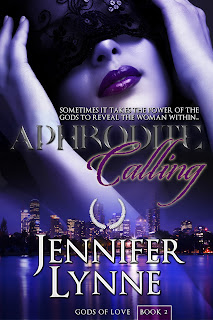 A woman with a secret past

Gina Deveraux is forced to confront her painful past when she attends a high school reunion. Born with male genitalia, she spent her childhood and teen years living as a boy, and has only now returned in an effort to put the past behind her so she can begin to live life without the continuing fear of loneliness and rejection.

A god of sexual desire on the edge of burnout

Himeros is one of the erotes, an aspect of Eros, and as such it is his duty to answer the call of sexual desire whenever a human needs him. But he has been living among mortals too long and his interest has waned. When he decides to accept one last call he finds a woman who is unique. A woman who encapsulates the whole human experience in her body, and her soul. Has he finally found the one with whom even a god of desire could find fulfillment?

After all, forever is such a long time to be alone.

She felt the zipper on the back of her dress begin to wend its way down her spine, and her breath caught when the warmth of a fingertip followed in its wake, urging the edges of her dress to slither away with greater ease until the material pooled at her hips. Then his lips were against her skin, branding her with heat, just at that dip where her neck melted into shoulder.

Gina let out a shuddering breath, one she hadn't even known she was holding, and arched her head to one side to allow him better access. So hard to think straight, when his hands were spanning her waist like that, caressing the edge of her ribs. When his lips and tongue were doing the most incredible things up the line of her neck to nuzzle in such an intimate manner at her earlobe.

"Himeros," she whispered, as her knees threatened to buckle at the heat and the heaviness between her legs. And it felt different, this time, from what she remembered of past encounters. It wasn't just centered in her groin, that familiar feeling of an impending explosion. It was her pussy that was hot and heavy, and aching to be stroked, yes, but she also felt the ache throughout her whole body, like a stream of spreading warmth. She hadn't realized it could feel this...damn...good!

She reached back to find his hips and pull him closer in against her, wanting to share this newfound sensation of desire.

"I know," she said, emboldened by these new feelings, wiggling her ass against the rock-hard core of him. "I can feel how much you want it. Me."

As she turned in his arms, she caught the momentary grin that lit his features before his mouth swept down to claim hers. And if she'd thought the sensations before were unique, they were as nothing to the onslaught that swept through her when his lips and tongue forced their way in to brand her with his essence. The power behind his kiss was so intense she couldn't even respond, other than to let out a moan that he swallowed then continued on. 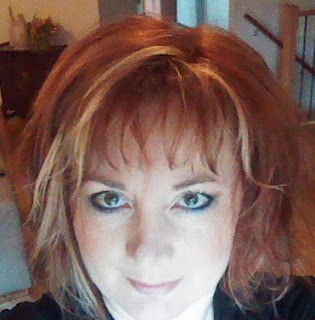 Jen loves her family, good coffee, red wine, and sitting by a cozy log fire watching the misty rain outside turn everything fresh and green. She hopes her tales of love and lust continue to excite readers, and her dream is to one day be able to write full-time.

Jennifer will award a $10 Amazon Gift Card and a gold-plated metal bookmark to a randomly drawn commenter from the tour.

-Giveaway is OPEN TO EVERYONE!
-To be entered, MUST leave a comment, ALONG WITH YOUR EMAIL ADDY.
-One commenter will be chosen randomly from all comments made throughout the tour, so the more tour stops you make a comment on the greater your chances of winning.  A list of all participating blogs can be found here.
-Giveaway ends at 11:59 PM CST on 8/3.
at August 02, 2012