A hockey player with a severe injury finds himself lost and looking for a distraction with the new girl in town who’s only looking for fun herself in this scorching story of friends-with-benefits who unexpectedly find a more meaningful connection.  Keep reading to get a tempting taste of Breakaway by Sophia Henry, along with getting my impressions of this romance set in the hockey world, then discover even more about this book by visiting the other sites hosting this tour.  In honor of this fifth installment in the Pilots Hockey series make sure to fill out the form below for the chance to win a $25 Amazon GC too! 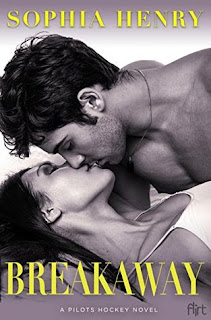 In a standalone hockey romance that tugs at readers’ heartstrings, a broken ex-pro learns to live and love again—all thanks to the complicated, wonderful nurse who gives him a second chance.
Brianna Collins needs to break away from her overbearing family. Her parents expect her to “fix” her brother after a series of concussions derailed his hockey career. Unfortunately, no doctor will give him clearance to play, and she’s finished with being the person they rely on to perform a miracle that will never happen. For Bree, a six-month nursing assignment at a hospital in Charlotte, North Carolina, is the perfect escape.
Luke Daniels, former forward for the NHL’s Charlotte Aviators, has spent close to a year rehabbing a career-threatening injury—and distracting himself however he can. Worlds collide when Luke realizes that the girl from his latest one-night-stand happens to be the new nurse at the hospital where he volunteers in the pediatric unit. What’s more, Bree’s the only person who makes him excited about life again.
Despite her initial reservations, Luke can’t help pursuing sweet, beautiful Bree. Then he realizes it was her brother whose career he ended with an accidental hit, and he falls back on the thing that’s always helped suppress his demons: alcohol. But if Luke doesn’t kick his old habits, he just may lose the one thing he loves more than hockey.

THE PREVIOUS TITLES IN THE PILOTS HOCKEY SERIES...

Fans of sports-themed romances will find this an entertaining addition to the genre with its angst-fueled romance, heartbreaking moments, and numerous scorching encounters. From the moment the protagonists meet there’s a crackling connection that jumps off the page, and despite all the self-doubts and differences between them, it’s a journey that kept me on the edge of my seat.

From the moment readers meet Luke Daniels we see a carefree man, a good man at the top of the hockey world, until an injury changes his life irrevocably.  The life he thought he’d have is suddenly turned upside down and from there we see a broken and bruised Luke whose past constantly weighs on him and affects how he sees himself and the kind of future he’s desperately trying to claim once he meets the supportive Bree.  Once he realized his time playing hockey was over he looked for a distraction and luckily found Bree whose desire to be friends-with-benefits felt like a wish come true until his heart became entangled in their casual connection.  Through each sweet word and deed he tried to prove that they could be something more, prove that he could be everything she needed.  With her time in town coming to an end though, and with the weight of his past making him doubt his ability to make a good future with her, everything comes to a head in a conclusion of tears that put my emotions through the wringer.  Luke’s a delicious hero who rose up from nothing to gain hockey success.  With the death of his father and his mother’s drug addiction he had to fight for everything as a child.  Hockey was the only thing worth living for and to lose it had my heart breaking for him.  Despite the pain his mother inflicted on him, and still does with the guilt trips she subjects him to, he always tries to do right by her.  He’s a kindhearted man who wears his heart on his sleeve who finds joy making others smile.  It added a lot of heart to his relationship with Bree that clearly started off as a scorching way to scratch an itch.  There was so much goodness surrounding Luke that when we see his demons resurface they’re all the more heartbreaking.  With each turn of the page I fell a little harder for Luke and was rooting for him every step of the way to get the HEA he so richly deserves.

Brianna Collins has always lived a life surrounded by hockey as her father was a star collegiate player, who went on to entrepreneurial success, along with her brother whose career ended with injury and who’s doted on by her parents.  Her brother has always been seen as the Golden Child and Bree has always felt like a shadow because of it and it’s just one of the reasons pushing her to Charlotte, North Carolina.  Feeling burned out and wanting to find some fun she luckily meets Luke whose the epitome of a good time. What starts out as casual quickly becomes something more though which scares her as she’s always been resentful of anything having to do with hockey.  Through his charming words and deeds, and through each erotically-charged encounter, Bree finds herself growing closer to Luke and rethinking the path her life was on.  Her brother’s arrival in town though soon creates unexpected conflict and heartache that will either bring her and Luke together or tear them apart for good.  On a whole Bree’s a good person with a big heart.  She’s been trying to leave the notoriety of her family name behind which has led to a lot of loneliness with very few connections.  Coming to Charlotte introduces her to a whole network of supportive friends and to the one man who she’s willing to put down roots for.  She’s a caring person who always wants to fix things, to help people, which sometimes makes her look a bit judgmental.  Her questioning of Luke regarding his pain pills frustrated me as she was initially a bit sanctimonious but as their bond grew she became more trusting.  In every other way though I applauded her time with Luke as she always supported him, never made demands, and embraced the sensuality that he brought out in her.  They’re a good match despite their obvious differences and I enjoyed their time together wholeheartedly.

This was a fun and flirty read at the start that took a grittier turn as the story progressed and as Luke confronted his past head-on in hopes of making a better future.  Luke was an engaging hero who pulled himself out of the gutter and became someone to look up to.  He was kind and unafraid to show his emotions and it made his relationship with Bree all the more powerful.  Bree and Luke were a crackling couple whose interactions teemed with sensuality.  Fun moments outside the bedroom spent getting to know more about each other were nicely balanced with numerous scorching encounters in the bedroom.  These erotic scenes were immensely satisfying but it frustrated me at the start that Bree treated Luke as nothing more than her personal sex toy.  As she grew closer to him these scenes became more emotional and less just about sex.  Though this book is part of the Pilots Hockey series, and characters from previous books make appearances, it can definitely be read on its own.  It’s a satisfying read that dragged at times and frustrated me occasionally, but with its delicious hero and numerous decadent delights it kept my heart fully invested in these characters and cheering them on from start to finish.

Award-Winning Author, Sophia Henry, is a proud Detroit native who fell in love with reading, writing and hockey all before she became a teenager. She did not, however, fall in love with snow. So after graduating with an English degree from Central Michigan University, she moved to the warmth of North Carolina for the remainder of her winters.
She spends her days writing books featuring hot, hockey-playing heroes. When she’s not writing, she’s chasing her two high-energy sons, watching her beloved Detroit Red Wings, and rocking out at concerts.