A career-minded woman finds herself attracted to a younger co-worker in this fun and flirty romance set in the world of medicine.  Keep reading to get a tempting taste of Oh, Baby! by Jill Blake, then learn even more about this book by visiting the other sites hosting this tour.  You’ll also hear from Ms. Blake as she discusses the older woman/younger man trope which will have you wanting to add this contemporary tale to your bookshelf.  In honor of this standalone story make sure to fill out the form below for the chance to win a $25 bookstore GC too!

The Older Woman-Younger Man Trope – by Jill Blake...I grew up on a steady diet of older man-younger woman romances. Think Charlotte Bronte, Jane Austen, all those “old skool” Harlequins. In those books, men had all the power. Heroes got to sow their wild oats, travel the world, make their fortunes, and dictate the rules. The heroines, meanwhile, remained fresh-faced, wide-eyed virgins who went straight from their fathers’ homes to their husbands’ homes, hemmed in by cultural norms and economic reality.
Fast forward to the new millennium. Women make up nearly half the U.S. workforce. Over 70% of women who have children under age 18 work outside the home. In fact, moms are the primary or only source of income for 40% of households with kids under 18! And guess what? Today’s popular literature—including the romance genre—is finally reflecting that. The balance of power has shifted. Women are no longer weak and passive, waiting for a hero to rescue them. Heroines have come into their own. They are strong, smart, outspoken, and willing to go after what they want.
Which begs the question: what do today’s women want? Well, I can’t speak for all women, but I can tell you what I want—and, by extension, what the heroines I write about want.
First off, respect and recognition in the workplace. Compensation on par with what men get. And in our personal lives, we want love—from partners who understand and appreciate us as equals.
This is why the older woman-younger man trope works. Especially today. The heroes in these books came of age in a world where women are no longer the “weaker sex.” These heroes expect women to be strong and confident, because these are the very qualities that make a woman sexy.
Oh, sure, I know what you’re thinking. What about all those older heroines who are going through tough times and periods of self-doubt, who worry about what their friends, or family, or society might say about an unconventional pairing? That’s the beauty of romance, or at least well-written romance: the road to happily-ever-after is littered with obstacles that must be overcome, and in the process, the characters learn and grow and become stronger, better people.
That’s what happens with the couple in my latest contemporary romance, Oh, Baby! The heroine is a thirty-nine year old surgeon who sees everyone around her pairing up and having babies, and wonders if she’s missed her chance at happiness. At this point, she’s more interested in having a baby than in finding Mr. Right. At least until a younger colleague piques her interest and sparks her libido. Too bad they’re all wrong for each other…or are they? 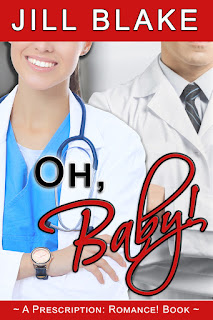 Lena Shapiro. Successful surgeon. Dutiful daughter. She sacrificed her personal life to build her career and take care of her mother and sister. Now thirty-nine and single, she watches her peers pairing off and having kids, and wonders if she missed out on her own chance at happiness.
Assigned to mentor a visiting colleague, Lena finds herself falling for the man instead. But Adam Sterling is all wrong for her: he’s too young, too arrogant, and too willing to push personal and professional boundaries. And he’s leaving L.A. for a job on the opposite coast.
With the date of Adam’s departure looming ever nearer, will Lena retreat to the safety of her familiar solitary life, or will she take a chance on an uncertain future with the man who might make her dreams come true?

Adam folded his arms across his chest, blocking her way. “The world won’t grind to a halt if you cut back your hours or take a day off once in a while.”
“I know that,” Lena said, glancing at the clock. “I’ll make some adjustments. But right now I feel fine, and I still have patients to check on.”
“Are you kidding me? You’re still hooked up to an IV.”
“Which the nurse is about to remove. Dr. Goodman said I’m good to go. He didn’t specify where.”
“Because any reasonable person getting discharged from the ER would go home.”
“I’ll go home after I finish rounding,” she said.
He glared at her, then cursed, pivoted on his heel, and strode out of the room.
Lena stared at the privacy curtain that continued to sway in his wake.
Where was the feeling of triumph at having won the argument? She should be glad that Adam was finally gone. But all she felt was deflated.
“Here we are,” the nurse said, bustling in with a clipboard. “We’ll go over your discharge instructions after I get that IV out.”
Minutes later, Lena was alone again, pulling on her clothes. There was a cursory knock, followed by the squeak of wheels.
“Your carriage, Princess.” Adam pushed the wheelchair toward her.
She blinked against the prickle of tears. Damned hormones. “I can walk.”
“Not to your car,” he said. “Hospital policy.”
“But—“
“Your patients are all taken care of,” he said. “Your partner will see the post-ops shortly. He said you should go home, and congratulations on the pregnancy.”

BUY AT AMAZON FOR 99 CENTS here.

A native of Philadelphia, Jill Blake now lives in southern California with her husband and three children. During the day, she works as a physician in a busy medical practice. At night, once the charts are all done and the kids are asleep, Jill writes steamy romances with smart heroines, sexy heroes, and guaranteed happy endings.