With the Christmas holiday fast approaching readers will find themselves celebrating the release of this collection featuring eleven best-selling and award-winning authors under the mistletoe as they share bite-sized holiday romances depicting the joy and romcom sweetness of the Christmas season! Keep reading to get a tempting taste of the Christmas Actually anthology, then get ready to help with your holiday gift-buying by filling out the form below for the chance to win a $25 Amazon GC! 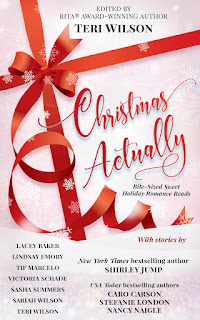 Christmas actually is all around...
The Christmas Wedding Date by Shirley Jump
When Holly McDaniels gets roped into attending her hometown Christmas ball, she convinces her handsome neighbor, workaholic Nick Corvino, to play the part of husband, giving the bah humbug bachelor a taste of Christmas magic that just might lead to a very real holiday happy-ever-after.
Gingerbread and Jingle Bells by Caro Carson
A big-city businesswoman answers her grandma’s plea for holiday-rush help at the family bakery, only to find herself apologizing to the small town’s handsome veterinarian each time she thwarts her grandma’s matchmaking schemes—until she discovers the mastermind behind all the romantic plans wasn’t her grandma, after all.
A Merry Aussie Christmas by Stefanie London
Their relationship is so fake it comes with costumes… Will spending a whole month as Patterson’s Bluff’s official Mr. and Mrs. Claus give a golden girl and the town outcast a second chance at love?
Mission: Merry Christmas by Nancy Naigle
A physical therapist finds her client bah-humbugging the Christmas spirit out of everyone and decides to focus on getting him back on the nice list.
Christmas In Sweetland by Lacey Baker
A restless hometown girl strikes a deal with the uptight guy next door to win a neighborhood holiday decorating contest—but they’ll both need a little Christmas magic to survive missing cupcakes, broken twinkle lights and falling in love. 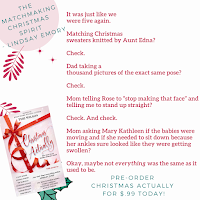 The Matchmaking Christmas Spirit by Lindsay Emory
An event planner and a handsome handyman keep getting thrown together by a matchmaking Christmas spirit who won’t stop meddling in matters of the heart.
Christmas Eve at the USO by Tif Marcelo
When former college sweethearts and Army soldiers reunite at the Dallas Airport USO during a Christmas Eve snowstorm, they try to ignore the love they lost—until the Christmas spirit decides to play Cupid, leaving them with no choice but to go after the love wished they still had.
A Midnight Clear by Victoria Schade
A dog sitter booked to spend the Christmas holiday caring for a client’s new puppy is surprised to discover that an approaching snowstorm has trapped her with the handsome man of the house.
Love Letters for Christmas by Sasha Summers
When a soldier decides it’s time to meet his long-time teacher pen pal, his visit to her classroom brings all sort of surprises—and might just give them their greatest Christmas gift ever: love.
EXCERPT:
Until this moment, Clay had envisioned his long-time pen pal as a sweater-wearing, baking-loving, storybook-reading, cat-collecting, grandmother-type. Maybe it was the tone of Lucy Brown’s letters—not condescending so much as nurturing. Every month, he received a new, comfort-filled letter from the woman he’d constructed in his mind. The contents of her letters had supported the white-haired, reading-spectacle wearing, almost-sad, and definitely- matronly woman he’d created in his head.
Miss Brown loved to knit—frequently with a cat in her lap.
Miss Brown liked tea, chocolate tea biscuits, and mystery novels.
Miss Brown spent her summers traveling all over the world—her destinations chosen by alphabetical order, then interest level. She’d explained this in such a practical way, he’d had a hard time finding fault with her logic. After all, there were so many places to see, she’d had to come up with some way to whittle down her options. Alphabetical order it was. The first summer they’d been pen pals, she’d spent a week in Cairo. Next summer it had been Denmark. Last summer, she’d visited Edenborough and wished she’d stayed longer. So far, she’d considered France, Frankfurt, or Florence. He’d had no problem envisioning Miss Brown in her orthopedic shoes, hand-knitted cardigans, reading glasses, while carrying a thick-travel book in a massive purse packed with tissues, cough drops, a sewing kit, and other useful items—trailing after her tour guide and snapping pictures with her camera.
But that had been his Miss Brown. This Miss Brown didn’t...fit.
It didn’t make sense. None of it. Even her shoes were wrong. They were cute shoes. Red, with a buckle. Not the thick white-soled, orthopedic shoes she should be wearing.
This was all wrong.
But he was here now. There was no going back.
“Well, I’ll let you introduce him to your class, Miss Brown. I’m sure they will be delighted to meet one of your pen pals in person.” Then Principal Charles was gone, the clicking of her heels—far taller and thinner than this Miss Brown’s heels—echoing down the laminate flooring of the elementary school hallway.
One of your pen pals? Meaning his Miss Brown had other pen pals? Did she write to many soldiers? The Miss Brown in his head probably would. She was a lonely spinster, cats aside, who’d probably collect pen pals like she collected tea cups. He’d known about the tea cup collection. He had not known about the pen pal collection.
A Snow Maiden for Christmas by Sariah Wilson
Christina and Jack were high school sweethearts until he left her behind to follow his dreams. Now he’s back and their meddling mothers are determined to give Christina and Jack’s former romance a second chance by forcing them to play roles opposite one another in their local winter festival. 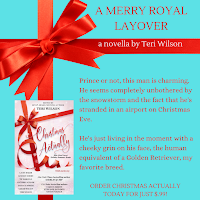 A Merry Royal Layover by Teri Wilson
When a veterinarian traveling to a remote European village to volunteer at an animal shelter during the Christmas holidays gets an unexpected first-class upgrade, she meets a charming stranger in the airport lounge who may or may not be the country’s crown prince.
FIND AT GOODREADS here. 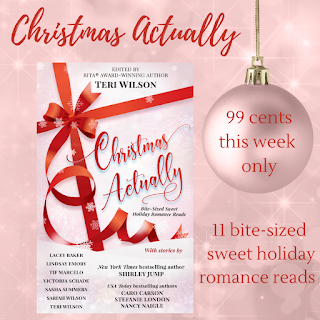 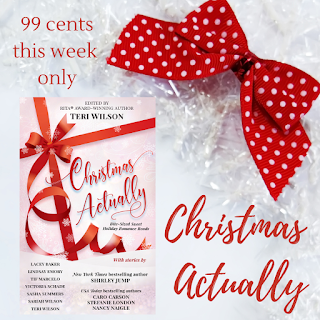