Readers will find themselves quickly charmed by this holiday-themed historical romance of a strong-willed young woman getting help from a bitter man to keep from losing her farm and family.  Keep reading to get a tempting taste of Simple Gifts by Anna DeForest, along with learning even more about this book by visiting the other sites hosting this tour, then add it to your bookshelf.  In honor of this first installment in the High Country Marshals series make sure to fill out the form below for the chance to win a $20 bookstore GC too! 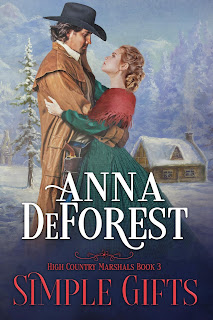 Christmas promises to be anything but merry for Robin Matthews who is waging a losing battle to keep her ranch and her family together. So when rugged ex-Marshal Nathaniel Hollister grudgingly agrees to help her run the Rocking M temporarily, he appears to be the answer to her prayers. But with Christmas fast approaching, Robin is going to need a miracle to keep from losing everything, including her heart to this kind but bitter man.
Though his attraction to her is growing by the day, Nathaniel knows he is too world-weary for a decent young woman like Robin. Once the most infamous lawman in the West, he turned in his badge after a tragedy left him guilt stricken and disillusioned. And yet Nathaniel is about to discover that the magic of Christmas has a way of making the impossible possible...and turning wishes into simple gifts that can last a lifetime.
*Simple Gifts was originally published as A Cowboy for Christmas from Kensington (2000)
EXCERPT:
His hands on her shoulders were warm and pleasantly heavy. His lips were surprisingly soft. The feel of them against her own was just heavenly. She thought standing this close to him, having him touch her like this might make her panic, but he did nothing to frighten her. For such a hard man, she was amazed he could be so gentle. He coaxed and smoothed his lips over hers, cajoling a response from her.
He tasted like apple pie. He smelled like the world out-of-doors—fresh, clean, and wild. Hesitantly, she kissed him back. She wondered if her relative inexperience showed. Somehow she had a feeling Nathaniel Dawson had kissed plenty of women in his time. Deciding she ought to do something bold, she reached her hands up and placed them on the top of his shoulders. She discovered instantly that they were hard and broad, the material of his worn shirt soft beneath her fingers. He was so big and male and vital, he made her head swim.
His lips left hers. She stood absolutely still as he kissed her cheekbones, her eyebrows, the line of her jaw. It was the most wonderful sensation. When he kissed the skin beneath the base of her ear, he sent little shivers racing down her spine. She could feel the roughness of the stubble on his cheek against her own, and she gloried in the sensation.
BUY FOR 99 CENTS AT:  AMAZON  |  SMASHWORDS

AUTHOR INFO:
Anna DeForest wrote her first book-length piece of fiction in fifth grade. She taught history at the Colorado Heritage Center and a Denver private school. She was thrilled when Leisure Books bought her first historical romance, Golden Dreams. She was actually watching Sesame Street with her four-year-old when she received the good news call from her agent, but she managed to tear herself away from Big Bird long enough to listen to the terms of her new contract.
Growing up in Colorado gave Anna a lifelong taste for outdoor activities such as hiking, riding and skiing. She also enjoys gardening, which is currently quite a challenge because armadillos keep rooting around in her garden in Dallas.
Anna has always tried to write the kind of romances she likes to read—stories about warm, caring people who pursue their lives and loves with passion. These days, Anna is excited about offering four of her previously published romances to her new readers, along with three romances that have never been published before. You can learn more about Anna and her books at www.annadeforest.com.
**********GIVEAWAY**********
a Rafflecopter giveaway
at December 14, 2020