Picking up right after the cliffhanger ending of Game Changer, readers will be ready for more of the combustible connection between the sassy, rainbow-haired heroine and the caveman hero we've come to know and love.  Keep reading to get a tempting taste of Playing for Keeps by Alley Ciz, along with getting my impressions of this snarky and sensual New Adult romance.  In honor of this third installment in the U of J series make sure to visit the link below for the chance to win a signed set of books and a $10 Amazon GC too! 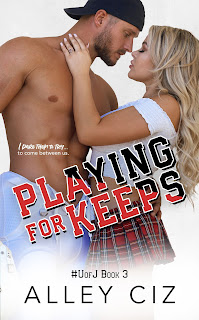 @𝗨𝗼𝗳𝗝𝟰𝟭𝟭: 𝗛𝗼𝘂𝘀𝗲 𝗽𝗮𝗿𝘁𝗶𝗲𝘀 𝗮𝗻𝗱 𝗵𝗮𝗻𝗱𝗰𝘂𝗳𝗳𝘀 𝗱𝗼𝗻’𝘁 𝗺𝗶𝘅. #𝗜𝘀𝗧𝗵𝗮𝘁𝗕𝗹𝗼𝗼𝗱#𝗗𝗼𝗻𝘁𝗠𝗲𝘀𝘀𝗪𝗶𝘁𝗵𝗧𝗵𝗲𝗙𝗹𝗼𝗰𝗸 #𝗞𝗮𝘆𝘀𝗼𝗻𝗼𝘃𝗮
𝑻𝒉𝒆 𝒎𝒊𝒈𝒉𝒕𝒚 𝑪𝒂𝒔𝒂𝒏𝒐𝒗𝒂 𝒉𝒂𝒔 𝒇𝒂𝒍𝒍𝒆𝒏.
𝗠𝗲: six foot five, two hundred and fifty pounds, collegiate football player.
Protected by my pint-sized girlfriend.
Comical. Ridiculous. 𝗕𝗥𝗢𝗞𝗘𝗡.
She tackled my heart, but 𝘵𝘩𝘦𝘺 want the rest of me.
𝑴𝒂𝒔𝒐𝒏 𝑵𝒐𝒗𝒂 𝒊𝒔...𝑴𝑰𝑵𝑬.
Gossips 𝘭𝘰𝘷𝘦 drama. Anything to up their likes, especially when 𝘸𝘦’𝘳𝘦 the story.
Enough is 𝗘𝗡𝗢𝗨𝗚𝗛.
I stopped hiding and paid the price...even have the 𝘴𝘤𝘢𝘳𝘴 to prove it. It’s time to control 𝘮𝘺 narrative.
I’m taking a page from my boyfriend’s playbook to prove he’s 𝘯𝘰𝘵 the only one playing for keeps.
***PLAYING FOR KEEPS is book 3 in the U of J Series and cannot be read as a stand-alone. It picks up right after the epic cliffhanger in GAME CHANGER threw you off of. Our rainbow-haired sass queen is out to prove her Caveman isn’t the only alpha in their relationship to win their #HEA*** 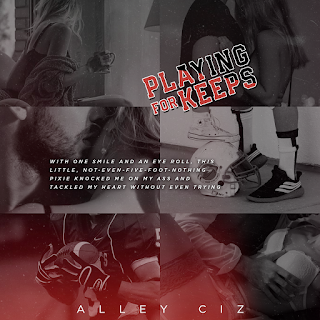 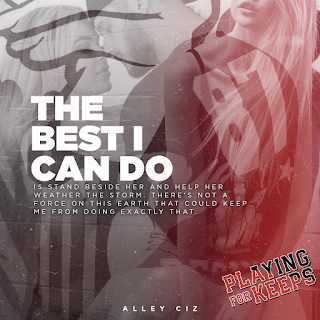 MY IMPRESSIONS OF THIS BOOK:
After surviving two previous cliffhangers I was more than ready to reach the end of Kayla and Mason's journey, a journey that held me captive while pulling at my heartstrings.  With the crushing end to the previous book there was nowhere to go but up and this book definitely ended on a high note with a conclusion that was both satisfying and empowering. For a couple who appeared to be polar opposites from the very start, these two have shown themselves to be a formidable couple who support each other through every high and low.  Through witty banter, sizzling interactions, and a connection that defied the odds I was wholeheartedly rooting this couple on as they really came into their own throughout this story.
Mason might've been a bit frustrating at times early on in the series, but here he left me drooling.  He's definitely book boyfriend material, particularly when flexing his caveman muscles and by showing Kayla through each subtle word and deed how much she means to him. Showing his love for her on the largest playing field was a romantic high point and sealed his book boyfriend status.  Kayla too stood strongly on her own two feet, putting her love and support of Mason out there for all to see in a tale that filled me with joy.  Surrounding this delightful main couple was an immensely appealing cast of secondary characters, larger than life friends who've quickly come to feel like family. The interactions between them, Mason, and Kayla were entertaining while bringing a smile to my face and a glimpse at what the future may bring as there are a few secondary characters who I'd love to see take center stage.
On a whole this was a quick read, one I hated to finish as I was in a dreamy haze of love and joy while reading about Mason and Kayla.  The previous two books broke my heart by the end but this book was just the band-aid I needed as this tale showed a couple utterly devoted to each who fought every fight to be together.  It was an uplifting story, a sexy one with bits of humor, as well as exhilarating scenes set on the field of college football.  These scenes immersed me in this world even more strongly, had me gobbling up this story more fully, and I applaud Ms. Ciz for her talent and skills in crafting such a memorable romance with unforgettable characters!
My rating for this is an A.
*I got this book from the author for review in exchange for my honest opinion. 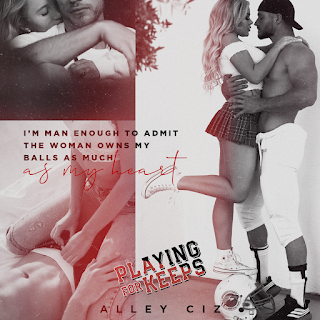 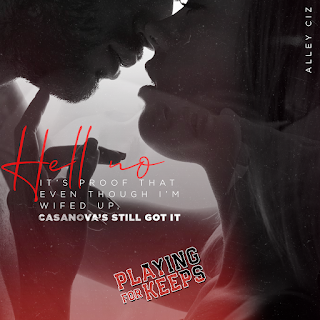 AUTHOR INFO:
Alley Ciz is an indie author of Contemporary/New Adult, Rom-Com, Sports Romances. She's a stay at home mom to 3 amazing and crazy mini royals, a 95lb lab, and let's face it on some days her hubby is her 4th kid...But to be fair she totally loves him a lot.
When she's not corralling her crazy mini royals she can be found writing the stories the voices in her head tell her. Caffeine is a staple in her daily diet since she does most of her writing late at night when the rest of her house is asleep, usually with her trusty dog Buke (short for Beukeboom reluctantly named after a NY Ranger even though she's a NJ Devils fan all the way. Is it any surprise she writes sports romances?
Pizza and mac-n-cheese are major food groups and she is a proud Potterhead and superhero buff.
She is a complete romance junkie and can always be found reading or listening to a book.
FACEBOOK  |  FACEBOOK READER GROUP  |  GOODREADS AUTHOR PAGE  |  NEWSLETTER  |  INSTAGRAM  |  PINTEREST  |  WEBSITE  |  YOUTUBE  |  AMAZON AUTHOR PAGE  |  BOOKBUB 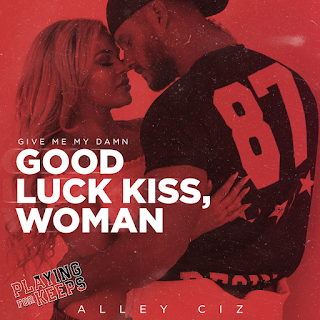