Opposites attract in this historical romance of a widower tired of being alone and a woman worried about putting her heart on the line as close quarters have warmer feelings between them bubbling to the surface.  Keep reading to get a tempting taste of Earl’s Well That Ends Well by Jane Ashford, then start counting down the days until this book releases on December 29th.  In honor of this fifth installment in The Way to a Lord's Heart series make sure to fill out the form below for the chance to win 3 sets of the first four books in this series too! 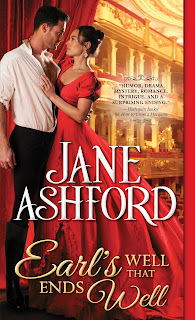