Readers will be on the edge of their seats from the very start of this story which features a heroine on the run from her dead ex-boyfriend's past with the help of a sexy billionaire priest carrying secrets of his own.  Keep reading to get a tempting taste of Order by Blair Babylon, then add this steamy and suspenseful tale to your bookshelf.  In honor of this second installment in the Billionaires in Disguise: Maxence series make sure to fill out the form below for the chance to win an e-copy of this book too! 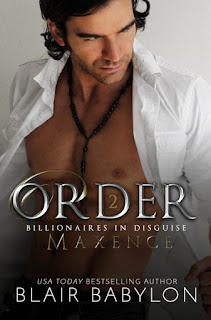 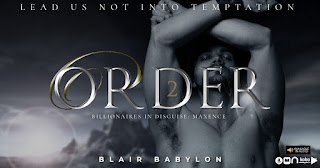 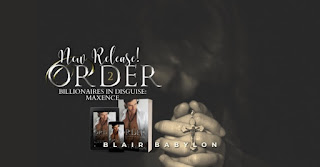 AUTHOR INFO:
"I'm passionate about books and literature. Books delve into what it means to be human and connect us to each other. I write intense, deeply imagined romance novels for serious readers because the world needs more love." ~~Blair Babylon
Blair Babylon is an award-winning, USA Today bestselling author who used to publish literary fiction. Because professional reviews of her other fiction usually included the caveat that there was too much deviant sex and too much interesting plot, she decided to abandon all literary pretensions, let her freak flag fly, and write hot, sexy, suspenseful romance.
WEBSITE  |  FACEBOOK AUTHOR PAGE  |  FACEBOOK READERS GROUP  |  TWITTER  |  INSTAGRAM  |  YOUTUBE  |  GOODREADS AUTHOR PAGE
**********GIVEAWAY**********
a Rafflecopter giveaway
at December 15, 2020