Opposites find their longtime friendship slowly becoming something more in an emotionally intense tale that has two close knit friends fighting an attraction while dealing with the weight of life and their painful pasts.  Keep reading to get a tempting taste of Damien, Forever by Tempest Phan, along with getting my impressions of it, then add this first installment in An Art of Sinners series to your bookshelf too! 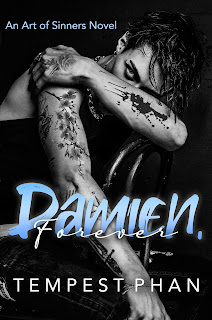 An angsty, friends-to-lovers, second-chance romance with a dash of new adult and a twist of rockstar.
Damien
She's everyone's favorite princess. Gorgeous girl next door. Homecoming queen. But to me, she'll always be so much more. The light in my dark, my best friend, my everything. But there's one thing she can't ever be. And that's 𝙢𝙞𝙣𝙚. Because I'll make damn sure to keep my filthy hands off her. Even if it kills me.
Bella
He's the boy of broken whispers. The one dripping ink. The one sowing fear. But to me, he'll always be so much more. The music in my soul, my best friend, my everything. And pretty soon, he'll be between my sheets, too. Because what baby girl wants, she 𝙜𝙚𝙩𝙨. Just watch.
FIND AT GOODREADS here.
PRE-ORDER LINKS:  AMAZON (US)  |  AMAZON (UK)  |  AMAZON (AU)  |  AMAZON (CA) 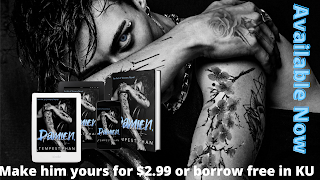 MY IMPRESSIONS OF THIS BOOK:
From the moment I picked up this book I was captivated!  From its soul-searing romance of friends to lovers, to dealing with issues of mental illness and abuse, this is a book that packs quite an emotional wallop.  From the first page to the last readers will find themselves on an unending rollercoaster ride of emotions that will sadden you, while making you smile, before steaming up the pages through interludes involving the heart and soul.
Damien and Bella have had a connection since they were children, becoming inseparable as both experienced losses at an early age that had them finding support by each other's side.  It's a connection that's as vital as breathing and is based on love...a love that slowly and steadily turns more physical which ultimately complicates things between them.  Their romance definitely put me through the wringer, pulled at my heartstrings through every speed bump thrown their way.  For every moment of joy between them, I also witnessed pain through poor decisions and low self-esteem, before differences in their social standings also threw wrenches into their HEA.  Theirs is clearly a HEA meant to be though and it's a hard-fought journey to get there.  At times both of them frustrated me with their decisions, by letting other people's judgements weigh on them, by denying what was so obvious between them, that I occasionally wanted to throw my kindle against the wall.  Despite those moments of frustration I found a romance that I was utterly enthralled by and which had me rooting for them every step of the way.
Damien Mortenson is seen as the town bad boy, the sexy but poor boy from the other side of the tracks whose mother worked for Bella's family and which was the start of the foundation to their lifetime connection.  Damien's a tortured soul due to his sister's death, his mother's mental illness, and his father's abandonment that harkens to his own battle with PTSD.  Music and Bella are the only bright spots in the darkness of his world, a world that is realistically depicted and had me aching for all that he had to deal with.  He's a young man with a caring heart and a protective nature but sees himself as a loser and unworthy of being anything more than a friend to Bella despite their obvious soul deep love.  Listening to the negativity led to an even more painful journey to HEA, moments where Damien loses himself in the darkness, and it hurt my heart when reading these sections.  These moments left me wanting to hug him non-stop!
There's more to Bella Davenport than just a pretty face, a dutiful daughter from a family of wealth.  She's a young woman with a big heart, devoted to and protective of the boy from the wrong side of town.  She's the only one who sees the real boy behind the piercings and tats, drawn to his pain in hopes of helping ease it.  Early on she seems to be a bit meek, but as the story progressed she became stronger and more self-assertive in what she really wanted which led to moments of heartache and frustration.  In spite of that she was always there for Damien, proof of her commitment to him despite all his attempts to push her away.  He wanted her to have a life, but there was no life without him in it.  Through actions both big and small she set out to show him that truth throughout their very rocky road to HEA.
From the very start readers will find this couple unforgettable and be fully captivated by the ups and downs of their friends to lovers romance.  Readers will be pulled into their lives early on, get caught up in all the bright joys and dark moments in their difficult journey to HEA.  They're a formidable pair, made stronger and yet more vulnerable by the love between them and I was on edge watching them navigate the highs and lows of their lives.  Alongside this enthralling main couple were a colorful cast of secondary characters who I hope to see more of in the future.  Lukas Stone, a rich boy lawyer with a love of art who's driven to help those less fortunate than he, is the first one to leave a big impression on me as the facade we see of him early on definitely changes throughout the story.  He became someone of real substance towards the end, someone carrying the weight of familial disappointments and pain, and I hope he finds his own HEA soon.  Damien's bandmates also intrigued me through their colorful looks and loud natures that belie their softer sides.  Their journey to stardom was a rough one, realistic in its hardships as well as the vices that are experienced once fame arrives.  I applaud Ms. Phan for the realism she brought to her story, the gritty and raw emotions depicted.  This was an epic romance, not always easy to read but well worth all the tears and frustrations along the way.  With this being the first installment in An Art of Sinners series readers will be left longingly counting down the days until we revisit this emotionally intense world!
My rating for this is an A.
*I got this book from the author for review in exchange for my honest opinion. 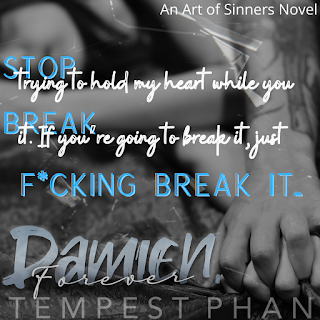 AUTHOR INFO:
Tempest Phan loves ink, words, leather pants, and emo (#SorryNotSorry). She lives in a grey, rainy region with her own real-life tattooed bad boy lawyer, their littles, and a pup. Good news is that all the terrible weather means more time for book boyfriends and writing about broken heroes and indomitable heroines. (By the way, she’s never met a bar of dark chocolate that she hasn’t fallen head-over-Loubs for).  Visit her WEBSITE to discover more about them and their books.
at December 27, 2020