Two people who've always rubbed each other wrong find themselves seeing each other in a different light after becoming trapped in a cabin during a blizzard that turns up the heat surrounding them.  Keep reading to get a tempting taste of The Best of Us by Kennedy Fox, along with getting my impressions of it, then add this second installment in the Lost in Isolation series to your bookshelf too! 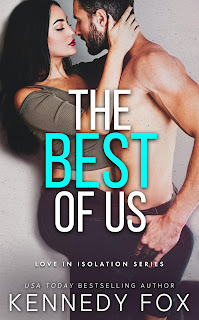 What happens when the biggest blizzard of the year hits and you’re trapped in a cabin with your best friend’s brother? You take every opportunity to spend time together and make him fall in love with you.
The Best of Us is a best friend's brother, opposites attract, and snowed-in together standalone romance.
BUY THIS BOOK here. 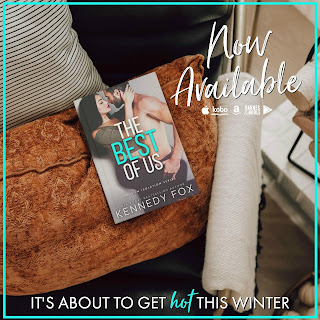 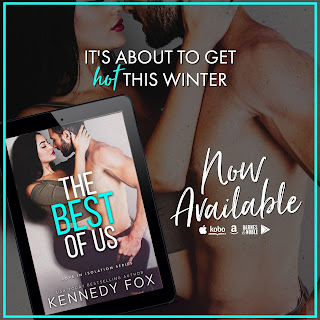 MY IMPRESSIONS OF THIS BOOK:
Into the chaos of the world that COVID has been causing I wasn't sure I was in the mood for a book that dealt with a pandemic...but it turns out that I was in the mood as I found this a delightful story with sizzle as well as heart and soul.  Kendall and Ryan have known each other for years, been enemies too for most of those years, but a weekend trapped in a cabin by a blizzard gives them the chance to REALLY get to know each other and explore the combustible connection that's always surrounded them.  From the first page to the last it's an entertaining journey with a few bumps along the way that charmed me a time or two as well as giving me a few blush-worthy moments.  Light-hearted exchanges were balanced with a few serious moments to leave a lasting impression that had me cheering and ready for the next book in this series.
Ryan's a great hero in every sense of the term!  Sexy, caring, with a strong work ethic makes him drool-worthy.  He comes from a family of wealth but chose a career that actually means something in the world...a doctor.  In a story set a year after a pandemic, and the release of a vaccine, readers are shown a Ryan that's struggling with all that came before.  He's mentally and emotionally struggling with all the deaths he witnessed and couldn't stop and it was a heartbreaking sight to see.  Despite all the pain he still loves being a doctor, but can this workaholic be able to balance the play he so richly needs alongside his work?  It's a bumpy balancing act to get to the answer in this sweet and sensual journey to HEA.
Kendall's an appealing heroine, but she hasn't found her place in the world yet which adds to Ryan's belief that she's nothing but a pretty face.  He's never bothered looking beyond the facade she shows the world to be the smart and sassy young woman she reveals herself to be here.  She's a kindhearted young woman, sweet, with big ideas for what she wants her life to be like and as she and Ryan engage in heartfelt talks she shows a deeper side to herself that was immensely likable.
Kendall and Ryan have been adversaries for years, but when it comes down to just the two of them the attraction brewing between them can no longer be ignored.  Their time in isolation is teeming with sexual tension, deep talks that put their hearts on the line, and though they seem like opposites they fit together beautifully.  It was an enjoyable journey to HEA between these former enemies, a journey that pulled at my heartstrings while endearing themselves to me wholeheartedly.  Along with getting deeper insights into this main couple, readers get an update on the couple from the previous book, a couple whose lives intersect with this story's couple.  Cami and Eli are getting ready for their next life step, still going strong together, and with a tantalizing event late in this story, I'm looking forward to what comes next in a well-crafted series I highly recommend!
My rating for this is an A-
*I got this book from the author for review in exchange for my honest opinion. 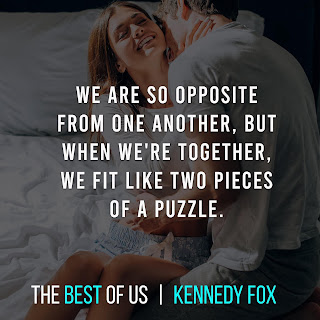 AUTHOR INFO:
Brooke Cumberland and Lyra Parish are a duo of romance authors who teamed up under the USA Today pseudonym, Kennedy Fox. They share a love of Hallmark movies & overpriced coffee. When they aren’t bonding over romantic comedies, they like to brainstorm new book ideas. One day in 2016, they decided to collaborate under a pseudonym and have some fun creating new characters that’ll make you blush and your heart melt. Happily ever afters guaranteed!
INSTAGRAM  |  TIKTOK #1  |  TIKTOK #2  |  TWITTER  |  FACEBOOK  |  WEBSITE  |  NEWSLETTER
at December 04, 2020