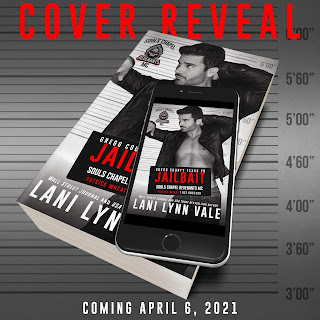 An ex-con who lost his freedom in defense of a young girl finds an unending connection to her that might be the only thing to save his heart and soul now that he's free.  Keep reading to get a tempting glimpse of Jailbait by Lani Lynn Vale, then add this third installment in the Souls Chapel Revenants MC series to your bookshelf when it releases on April 6th! 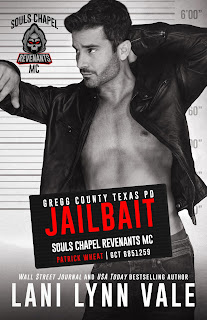 The first time I saw her was across the room at a bar. I had no idea at the time that she was only sixteen. All I knew was that she was beautiful, she was sending me do-me vibes from across the room, and I was fresh off a deployment where there’d been nobody but men for nine of the longest months of my life.
The second time that I saw her was at a court hearing that would decide how long I’d be sent to prison for. She was a cute little curly-haired blonde with wide, expressive eyes, a banging body, and the reason that I’d gone to prison in the first place.
The third time I saw her was through a glass divider of the prison visitation room as she waited for her stepfather, my lawyer, to tell me how sorry he was that he lost my case. Especially when I’d been the one to kill the man that was about to kill his daughter.
The last time, the time that I decided enough was enough, was when I saw her at my bar eight weeks after I’d been set free.
Unlucky for her, I’d stopped being a good guy about two seconds after those bars closed behind me twelve years ago. Now all that was left was a shell of a man that didn’t see the good in anything.
Anything except for her.
FIND AT GOODREADS here.
PRE-ORDER LINKS:  AMAZON  |  iBOOKS  |  BN  |  KOBO

AUTHOR INFO:
Lani Lynn Vale is a Wall Street Journal & USA Today Bestselling Author of over thirty titles. She is married with three children, two dogs, two cats, a donkey, and a couple (a couple also meaning over twenty) chickens.
When she’s not writing, you can find her curled up in her favorite chair reading. Lani is married with three children and lives in the Great State of Texas.
WEBSITE  |  FACEBOOK  |  INSTAGRAM  |  TWITTER  |  GOODREADS AUTHOR PAGE  |  BOOKBUB
at December 18, 2020