Book Tour for My Brother’s Roommate by Kendall Ryan (REVIEW)......

A stoic and serious hero finds himself giving into his unexpected attraction to his roommate's sister in this fun and flirty romance of a weekend of forbidden words and deeds, a romance dealing with a painful past and the bright promise of the future.  Keep reading to get a tempting taste of My Brother’s Roommate by Kendall Ryan, along with getting my impressions of it, then add this second installment in the Frisky Business series to your bookshelf! 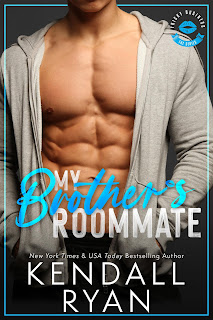 There are a few things you should know about my brother’s roommate.
Wolfie Cox is...complicated. Terminally sexy, and more importantly, he has an impressive stick lodged so far up his ass, he’s about as emotionally available as a chinchilla. Actually, that might be an insult to the chinchilla community.
So, naturally, I want to ride him like a bicycle.
He thinks I hate him. Mostly because I’ve led him to believe this. It’s easier than admitting the alternative.
And while Wolfie is about as soft and cuddly as a fork, I’m the opposite. A good girl. Reliable. Conscientious. Oh, and completely panicked about an upcoming work conference.
Wolfie’s usually allergic to altruism, so when my brother volun-tells him to help me out by escorting me to said conference where everyone else will have a plus-one...I say thanks, but no thanks. Surprisingly, Wolfie is unflinching about this. And that’s the story about how I got stuck in a hotel with my brother’s hot (grouchy) roommate.
Thank you for coming to my TED talk.
In all seriousness, this isn’t a game to me, and hormones aside, I need to impress my boss this week so the promotion I’ve worked hard for doesn’t get handed to his spineless nephew. But with Wolfie and me sharing a hotel bed, things get confusing quickly. 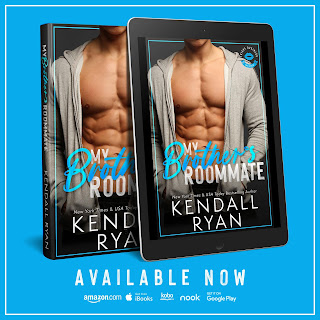 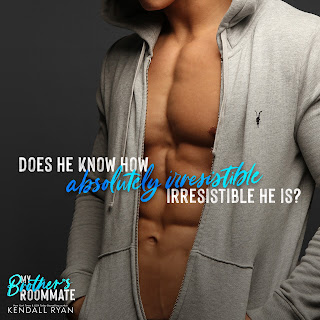 MY IMPRESSIONS OF THIS BOOK:
When it comes to fun and flirty reads, with surprising depth, I can always count on Ms. Ryan to give me exactly what I need.  This latest dive back into the world of the Frisky Business series was yet another winner and it's all because of Wolfie...friend, roommate, business partner to Connor, whose sister soon becomes a delightful distraction in his life.  When a work retreat for Penelope requires a plus one it's Wolfie who gets volunteered for the job of fake boyfriend, but as the two spend more time together readers learn about what makes Wolfie tick while watching the heat get turned up between this burgeoning couple.
From the moment I saw Wolfie I was in love!  He's a serious young man, broody, with a guarded nature fueled by a difficult childhood that is slowly revealed throughout his weekend with Penelope.  It's a past with an alcoholic parent, as well as an absent one, which led to him raising his sister and souring on love and commitment from a young age.  As an adult he doesn't do relationships, isn't willing to make himself vulnerable, which makes him the safest choice Connor can find to help his sister.  A weekend spent with Penelope takes an unexpected turn though when a long-hidden attraction between them combusts and leads to scorching encounters and heartfelt talks.  It's an unexpected complication that weighs on them as they work through these new feelings in a pairing that was very entertaining.  Wolfie's talks with Penelope gives readers some truly funny banter as each gives as good as they get.  There's tons of sexual tension surrounding them too as their chemistry was off the charts once they finally admitted their feelings.  Their heartfelt talks were my favorite moments though as it showed a different side to Wolfie, one that I found very endearing and one that had me wanting to hug him.  His past explained so much about why he is the way he is now and I applaud Ms. Ryan for addressing it in the respectful and realistic manner she did with things never getting overly dark but not sugar-coating them either.
Penelope's a likable heroine but unfortunately she didn't leave as strong of an impact on me.  She's smart, focused, and career-driven which left little time for anything else in her world.  Being the lone female in a male-dominated job meant never showing weakness, never being anything but the best, so she needed the work retreat to go well. Up until their weekend together Penelope always appeared aloof when around Wolfie, hiding an attraction to the man who might distract her from her work.  Being in close quarters though meant not being able to keep secrets anymore, not hiding behind the walls both of them erected.  Penelope pushed Wolfie into seeing all of his wonderful qualities after years of him not feeling worthy enough.  She gave him unconditional love and support and both of them showed real growth as the story progressed, both of them becoming more self-assured as each balanced the other out.
On a whole this was a sweet and steamy read with witty banter full of heart and soul. Wolfie was a drool-worthy hero, a complicated man who finally found the healing power of love, one with a past that will have readers cheering him on to HEA.  Penelope is a good match for him as she's a strong-willed heroine more than capable of helping him deal with the demons of his past while fighting her own fights. Together they're a formidable pairing!  Alongside this appealing main couple were lots of moments spent with Connor, brother to Penelope and friend/coworker to Wolfie, as he has to deal with some big changes himself.  The latter half of the book spent much time on him...which I would've loved to have spent with Wolfie and Penelope instead.  But with him taking center stage in the next book in this series I was definitely left intrigued by the groundwork laid here and am now breathlessly counting down the days until we learn even more about the changes to Connor's life.  Readers looking for a quick yet satisfying read can do no wrong when picking up a Kendall Ryan book...so don't wait any longer!
My rating for this is an A-/B+
*I got this book from the author for review in exchange for my honest opinion.
AUTHOR INFO:
A New York Times, Wall Street Journal, and USA Today bestselling author of more than three dozen titles, Kendall Ryan has sold over 3 million books and her books have been translated into several languages in countries around the world.
Her books have also appeared on the New York Times and USA Today bestseller lists more than 100 times. Ryan has been featured in such publications as USA Today, Newsweek, and InTouch Magazine.
She lives in Texas with her husband and two sons.
WEBSITE  |  FACEBOOK  |  INSTAGRAM  |  NEWSLETTER  |  TWITTER  |  PINTEREST  |  GOODREADS AUTHOR PAGE  |  AMAZON AUTHOR PAGE |  BOOKBUB AUTHOR PAGE
at December 01, 2020