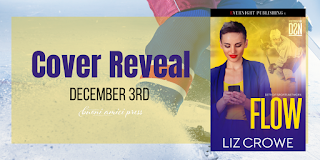 It's a blast from the past as second chances are given when a woman is reintroduced to her unrequited high school crush...a man who wants a do-over for the hurt he caused her long ago in a sizzling connection that has them waging battles on the ice and off.  Keep reading to get a tempting glimpse of FLOW by Liz Crowe, then start counting down the days until this second installment in the Detroit Sports Network hits bookshelves on December 18th too! 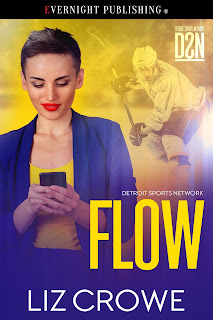 When Emerson Tyler’s unrequited high school crush crashed into her first group meeting of the DSN’s social media department, it was strange to say the least. When she learned that her crush wasn't as “unrequited” as she’d always believed, things got even stranger.
She'd sworn on the day Bryce Nordlinger crushed her teenaged heart--not to mention ruined her reputation in order to save his lady-killer status--that she would never trust him or any man ever again. And she had no intention of breaking that oath, no matter how much more tempting he’d become as a grown up NHL star.
Bryce had always wanted Em to be more than the smart, snarky high school girl who helped him with his terrible English essays. But he’d been busy burnishing his rep as future jock stud, and when his fellow hockey bros caught him skating with her alone in a deserted rink, he’d chosen the easiest path--one that left her hurt in a way he never thought he’d be able to heal.
His complete shock at seeing her, all grown up and more beautiful than ever in the meeting room at DSN, morphed into a steel-plated resolve. He would win her back and make up for the mess he’d made of her high school senior year, while dragging the once-proud Detroit hockey program out of the dumpster fire and back to prominence at the same time.
PREORDER LINKS:  AMAZON  |  iBOOKS  |  BN  |  KOBO  |  SMASHWORDS 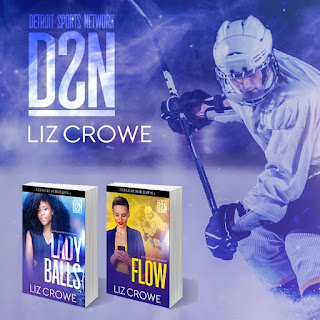 AUTHOR INFO:
Amazon best-selling author, mom of three, Realtor, beer blogger, brewery marketing expert, and soccer fan, Liz Crowe is a Kentucky native and graduate of the University of Louisville currently living in Ann Arbor. She has decades of experience in sales and fund raising, plus an eight-year stint as a three-continent, ex-pat trailing spouse.
Her early forays into the publishing world led to a groundbreaking fiction subgenre, “Romance for Real Life,” which has gained thousands of fans and followers interested less in the “HEA” and more in the “WHA” (“What Happens After?”).
With stories set in the not-so-common worlds of breweries, on the soccer pitch, in successful real estate offices and at times in exotic locales like Istanbul, Turkey, her books are unique and told with a fresh voice. The Liz Crowe backlist has something for any reader seeking complex storylines with humor and complete casts of characters that will delight, frustrate and linger in the imagination long after the book is finished.
WEBSITE  |  FACEBOOK  |  TWITTER  |  GOODREADS AUTHOR PAGE  |  NEWSLETTER  |  INSTAGRAM  |  PINTEREST
at December 03, 2020