A car accident, and a car in need of repair, brings together two very different people in this intensely emotional m/m romance.  Keep reading to get a tempting taste of Doc Cedarwood by Megan Slayer, then learn even more about this book by visiting the other sites hosting this tour.  In honor of this eighth installment in the Cedarwood Pride series make sure to fill out the form below for the chance to win a $15 bookstore GC! 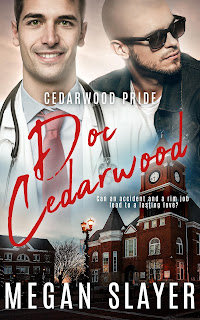 Can an accident and a rim job lead to lasting love?
Aiden Connor isn't looking for a date. Sure, he wants one, but relationships seem to be too difficult to maintain. He's an ER doctor and doesn't have time for commitment...that is, until he runs over a curb and needs a new rim for his sports car. The mechanic isn't anything like he expects, but could be the one man he needs if he's willing to open his mind and heart.
Matt Phillips equates dating with disaster, but sees himself as an eternal optimist. When he catches sight of Aiden, he wants to give relationships a try. Every cell in his body screams to get the sexy doctor naked and in his bed. But Matt has demons and addictions he's still working through. Will he fall prey to his past or learn and move forward with the hot doctor?
EXCERPT:
“Do you have a tow truck?"
“We do. What happened? Usually people come here in a vehicle. You seem to be without one.” The man smiled. The five o’clock shadow darkened his cheeks and his blue eyes sparkled. He’d combed his hair into a short mohawk and the inch-long spikes glimmered in the pink light of the neon sign.
Aiden read the man’s name tag. Matt. Funny, the guy didn’t strike him as a Matt. More like a Roscoe or a Boss. He smoothed his palms over his thighs. Blood rushed through his body and his nerve endings tingled. Each time he swept his gaze over Matt, his pulse reacted. Either he needed a date and sex, or he’d lost his mind from sleep deprivation. He straightened his shoulders. He wasn’t there for a date. “I ran over the curb down the road. I ruined my tire and probably more."
“If you hit the curb on Walker Road, then you jacked up more than a tire. If the rim isn’t a mess, I’d be shocked.” Matt disappeared into the garage bay, then stepped back out again without the rag. He snorted. “Most rims are a mess and if you did one hell of a job on it...” He whistled, then grinned. “Nice.”
Aiden swayed on his feet. Go figure, he’d found the one mechanic in town to make a lewd joke about rim jobs. “Can you fix it?"
“I’ll get the truck. I doubt I’ll be able to get to it today because I need to find the right rim to fit your car. That’ll take me at least a couple of hours tomorrow to locate. The tire will be easy—unless you did more damage. I won’t know that until I get a look at the car.” Matt tugged a set of keys from his overalls.
“Where did you leave it?"
“Where I collided with the curb.” He pointed down the road. “You’re sure it’ll take that long?"
Matt narrowed his eyes. “Guessing from your outfit, you’re late. For a date or your wedding?”
BUY LINKS:  AMAZON (US)  |  AMAZON (CA)  |  FIRSTFORROMANCE  |  BOOKS2READ  |  iBOOKS  |  BN  |  KOBO 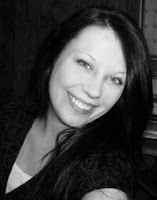 AUTHOR INFO:
Megan Slayer, aka Wendi Zwaduk, is a multi-published, award-winning author of more than one-hundred short stories and novels. She’s been writing since 2008 and published since 2009. Her stories range from the contemporary and paranormal to LGBTQ and BDSM themes. No matter what the length, her works are always hot, but with a lot of heart. She enjoys giving her characters a second chance at love, no matter what the form. She’s been the runner up in the Kink Category at Love Romances Café as well as nominated at the LRC for best author, best contemporary, best ménage and best anthology. Her books have made it to the bestseller lists on Amazon.com.
When she’s not writing, Megan spends time with her husband and son as well as three dogs and three cats. She enjoys art, music and racing, but football is her sport of choice. She’s an active member of the Friends of the Keystone-LaGrange Public library.
WEBSITE  |  BLOG  |  FACEBOOK  |  AMAZON AUTHOR PAGE  |  BOOKBUB  |  INSTAGRAM  |  GOODREADS AUTHOR PAGE  |  TWITTER  |  NEWSLETTER
**********GIVEAWAY**********
a Rafflecopter giveaway
at January 28, 2021