Fans of historical romances will find themselves drawn to this intensely emotional romance of past decisions and future possibilities that will keep you glued to the pages.  Keep reading to get a tempting taste of Highland Defender by Kathryn Le Veque, then add it to your bookshelf.  In honor of this second installment in the Scots and Swords series make sure to fill out the form below for the chance to win 1 of 5 copies of the previous book in this series too! 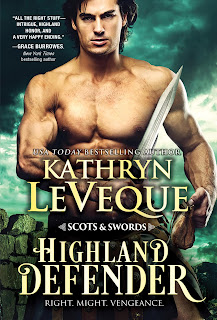 Gladiator meets Fight Club in the Scottish Highlands in a new series from USA Today bestselling author Kathryn Le Veque.
Ashamed of a decision he made in battle that cost good men their lives, Bane Morgan escapes to Edinburgh to forget his past. But the more time he spends away from his Highland home, the more he’s filled with regret and despair.
Lucia Symington knows something about despair. Forced to work off a family debt for a clan with little moral compass and a particular hatred for her, Lucia loses herself a little more each day. When a chance meeting with Bane gives them both a glimpse of what their future together could be, Bane pledges himself to the Ludus Caledonia, the warrior training club where he can reconnect to the fire for justice that still burns within him. The Highland Defender has returned...only to discover that his quest to free his lady could cost them both everything...
EXCERPT:
Oh, but there was a storm churning inside of Lucia, and the lightning she’d come to associate with Bane was flying in all directions. His close proximity had started a firestorm, and she was struggling to stay on an even keel.
Gazing up at him, she could feel his hot breath in her face as his right arm went up, casually bracing himself against the support beam of the stall over her head as he looked down upon her. The closer he loomed, the more the lightning sparked.
“I...I dunna hear it often.”
“From the men around here?”
“Never from them.”
“Then they’re fools.”
“Or mayhap they know their place.”
A grin spread across his lips. “I’ve never been accused of knowing my place,” he said huskily. “Even if I did, in yer case, I’d ignore it.”
God, he was so close. Lucia was having difficulty breathing and she turned her head, looking away from him because she was thrilled and intimidated at the same time. Looking at him made her feel as if she were losing control of herself. She could see him in her periphery as he leaned in, taking a long, deep smell of her hair.
It was enough to turn her bones to jelly.
“Bane...” she said breathlessly.
“Shush,” he murmured. “Let me smell ye. I want tae know what an angel smells like.”
It wasn’t just her hair he was smelling, but her skin. He sniffed her neck, moving to her shoulder and smelling that as well. All the while, he didn’t touch her. He didn’t make a move to make contact. But his face, his nose, was close enough that Lucia could feel him brushing against her. His heated breath spilled over her skin, blowing against her like the bellows of a smithy’s forge.
It was intoxicating.
“What does an angel smell like?” she managed to ask.
He moved so his face was next to hers. He was looking at her profile at close range as she looked away.
“Beauty,” he muttered. “Strength. Honor. It smells like everything a man needs in life.”
She sighed in utter delight as his words filled her ears. When his lips gently kissed her cheek, her jelly bones gave way and she slumped back against the wall. Bane swiftly moved forward, slipping his arms beneath hers and bracing her against the stall so she wouldn’t fall. As she turned to him, opening her mouth to speak, his mouth slanted over hers in a deliciously tender kiss.
The lightning exploded.
Lucia could hear little gasps as he kissed her, hardly aware they were her own. For all of Bane’s size and strength, his kisses were so very gentle, like the touch of a bird’s wings, something so delightful yet something that filled her with awe and wonder. She’d never been kissed before.
Not even close.
It was as if the sun suddenly burst out from behind the clouds.
Her arms went around his neck, holding him firmly against her as she responded to his heated kiss. Enfolded in his embrace, she was vastly aware of his body pressed against hers, the heat from his big frame filling her with a comfort she’d never known before. She could hardly breathe, but she didn’t care. She welcomed the giddiness. He was overwhelming her with the virile masculinity that had been buried beneath that street filth.
His scent filled her nostrils, too.
Glorious.
And then it was abruptly over.
BUY LINKS:  AMAZON  |  BN  |  iBOOKS  |  KOBO  |  BOOKSHOP  |  BaM  |  WALMART  |  BOOKS2READ
AUTHOR INFO:
With over one hundred published novels, KATHRYN LE VEQUE is a critically acclaimed USA Today bestselling author, a charter Amazon All-Star author, and a #1 bestselling, award- winning, multi-published author in Medieval Historical Romance and Contemporary Romance. She lives in California.
**********GIVEAWAY**********
a Rafflecopter giveaway
at January 30, 2021