Readers will find themselves captivated by this exhilarating tale that beautifully balances action and romance.  Keep reading to get a tempting taste of Big Bad Wolf by Suleikha Snyder, then start counting down the days until this book releases on January 26th.  In honor of this first installment in the Third Shift series make sure to fill out the form below for the chance to win 1 of 5 copies of this book too! 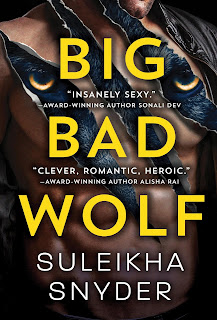 They call him a monster. More wolf than man—more dangerous than any predator.
They have no idea.
Joe Peluso has blood on his hands. He took out the mobsters responsible for killing his foster brother, and that one act of vigilante justice has earned him countless enemies in New York's supernatural-controlled underworld. He knows that shifters like him deserve the worst. Darkness. Pain. Solitude. But meeting Neha makes him feel human for the first time in forever.
Lawyer and psychologist Neha Ahluwalia knows Joe is guilty, but she’s determined to help him craft a solid defense...even if she can't defend her own obsession. Just one look from the wolf shifter makes her skin burn hot and her pulse race. When a payback hit goes wrong, Neha’s forced to make a choice: help Joe escape or leave him to his fate. Before long they're on the run―from the monsters who want him dead, from their own traitorous hearts, and from an attraction that threatens to destroy them.
EXCERPT:
The man who sat across from her looked like he wanted to eat her, and Neha Ahluwalia had no doubt that he could. In great big bites. Laying her to waste with swipes of his claws.
Would it be kinder than what he’d done to land himself behind bars? That she had no inkling of. But she did know he was guilty. Guilty and a killer. One was a legal distinction, the other largely genetic, but they were both equally true. It wasn’t just the look in his eyes. Not just speculation or suspicion or her overactive imagination. It was the facts. Spelled out in fine print, looped in strands of altered DNA. Joe Peluso was the monster in the closet, the creature you were warned about in fairy tales...and still, somehow, not the scariest white man Neha had encountered while doing her job. What passed for humanity these days terrified her far more than the things that went bump in the night.
His first trial had dominated the headlines for months. “Unknown Sniper Spurs Gangland Chaos.” “Brutal Killer Caught!” “I Did It: Queens-Born Shooter Confesses.” You couldn’t walk by a newsstand or flip past the local news without seeing Peluso’s face. His police mug shot. Broad features spattered with cuts and bruises. Ears that stuck out in almost comical contrast. He looked dangerous. He still looked dangerous. Like someone who would absolutely cut down four members of a Russian drug ring while they were eating dinner—leaving them facedown in their borscht—and then stab another two guys in close combat in the parking lot.
“Yeah, I fuckin’ did it! Is that what you want me to say?” he’d shouted in court, according to the transcripts. “Let’s just get this bullshit over with!”
What the transcripts hadn’t said was that he’d almost transformed while raging on the witness stand. It wasn’t that much of a surprise to people in law enforcement, like her—all kinds of new species had inched their way into the light since the Darkest Day in 2016, and she had more than a few in her own family—but the ripple of fur across his body, the fangs, had been enough to throw the court into a tailspin. Pun fully intended. That he’d shot people, stabbed people, but hadn’t turned berserker—hadn’t devoured his victims—had put a whole different spin on his case. Instant mistrial. Instant cover-up...at least as far as the press and the public were concerned.
Neha should’ve been terrified at the prospect of this new client and of the reality of him sitting across from her right now. And, sure, maybe she’d freaked out a little that morning at the firm. She’d spilled coffee on her second-best blazer and asked her favorite senior partner to repeat himself. “I want you to sit in, Neha,” Nate had obliged. “I think you could learn a lot on this one...and I think we could learn a lot from your take. I want your profiling skills on full display."
As a junior associate, she was practically begging to log some more billable hours and hack away at her law-school debt. But the Peluso case? Not one she’d been expecting to have land on her plate. Not high on her list, since it wasn’t exactly going to help pay the bills. But she’d said yes anyway. Because how did you turn something like this down? A vigilante shape-shifter in a Sanctuary City? It was the kind of opportunity that could make or break her career...even if it didn’t break the bank in the process.
Now here they were at the table. Her, Nate Feinberg—the first chair on the case—and his second chair and partner in defending crime, Dustin Taylor. With Joe Peluso himself staring back at them. His bruises were fresh. Probably from a recent tussle in jail as he waited for the new trial date. But everything else was the same as in his picture. His dark-brown hair chopped short in a blunt cut. A harsh-featured face only a mother could love. Those ears. And his dark, cold eyes. Meeting them, acknowledging his blatant perusal, Neha knew without a doubt that he was capable of taking lives. Professional. Efficient. Ruthless. But there was something else there, too. Not vulnerability. Not softness. Nothing like that. Just...depth? A hint of something below that chilly surface, something charismatic or compelling. A mystery waiting to be solved. Was it the monster? Or was it the man? Either way, Neha couldn’t—wouldn’t—take her eyes off him.
PRE-ORDER LINKS:  AMAZON  |  BN  |  iBOOKS  |  KOBO  |  BOOKSHOP  |  BaM  |  WALMART  | BOOKS2READ
AUTHOR INFO:
SULEIKHA SNYDER is a best-selling and award-winning author of contemporary and erotic romance, whose works have been showcased in Entertainment Weekly, BuzzFeed, The Times of India, and NPR. An editor, writer, American desi and lifelong geek, she is a passionate advocate for diversity and inclusivity in media of all kinds. She currently lives in Chicago. Visit her website at www.suleikhasnyder.com and follow her on Twitter @suleikhasnyder.
**********GIVEAWAY**********
a Rafflecopter giveaway
at January 23, 2021