A hockey player wounded by his past finds himself drawn to the sassy, strong-willed reporter who pushes him like no one ever has before in this exhilarating and emotional romance.  Keep reading to get a tempting taste of Kit by Brenda Rothert, then add this eighth installment in the Chicago Blaze series to your bookshelf! 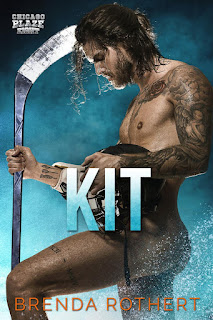 Kit
Molly Lynch isn’t like any woman I’ve met before. The pretty, ball-busting reporter has a penchant for asking questions that dredge up memories I’d rather keep buried. I answer them, though, because I’m so intrigued by her—a mix of shy and bold, so set in her ways that the slightest change knocks her off kilter. The closer Molly gets to my dark truth, though, the more I try to shift her focus to what I want most—her total surrender to me in the bedroom.
Molly
I finally have the life I’m meant for. Predictable. Boring. Safe. NHL player Kit Carter upsets the stability I crave when he looks at me with his dark eyes, wounded and guarded, but also swirling with desire. I can’t let him figure out who I truly am—driven not by ambition but by anxiety. Unable to let go of my control, even for a second. There’s something about Kit that draws me to him so powerfully it’s no longer a choice, though. I need to give in, even if it costs me everything.
FIND AT GOODREADS here. 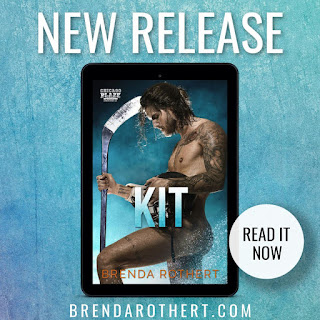 BUY LINKS:  AMAZON  |  iBOOKS  |  KOBO  |  BN
AUTHOR INFO:
Brenda Rothert is an Illinois native who was a print journalist for nine years. She made the jump from fact to fiction in 2013 and never looked back. From new adult to steamy contemporary romance, Brenda creates fresh characters in every story she tells. She’s a lover of Diet Coke, chocolate, lazy weekends and happily ever afters.
WEBSITE  |  FACEBOOK  |  TWITTER  |  PINTEREST  |  WATTPAD  |  AMAZON AUTHOR PAGE
at January 26, 2021