A second chance at HEA fuels this seductive story of opposites attracting as a young woman meets the man she gave her heart to years ago while he's doing time in jail which leads them down a rocky road to making a life together.  Keep reading to get a tempting taste of Puck's Property by Monique Moreau, along with my impressions of it, then add this fifth installment in the Demon Squad MC series to your bookshelf! 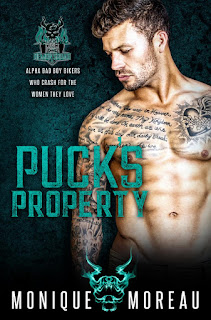 A lonely social worker.
A biker behind bars.
Can their red-hot passion set them free?
What if your first love was your one true love? Eight years ago, Puck broke Ava's heart. She picked up the pieces, patched them together, and kept going. Yet she never forgot him. When Puck sauntered through her office door at work, she was shocked to find a brawny, tatted-up biker dressed in an orange jumpsuit with the word INMATE stamped on the back.
What if you rediscovered the passion you carelessly threw away in your youth? For Puck, the only good thing about his trip to the jailhouse social worker's office was finding Ava again. All grown up, she looked luscious, and he bet she tasted even better.
Breaking up seemed like the right thing to do at the time, but no other woman could replace Ava. Fate brought them together again and Puck wouldn’t make the same mistake twice. Ava was his property and he’d bring her to heel—no matter what it took. If that included blackmail, so be it. A biker never won by playing fair.
But what happens in jail doesn't always stay in jail, and dark forces conspire to divert destiny and tear these lovers apart. Will their love survive a second trial?
Looking for a steamy ride with a splash of power exchange? Look no further and get it now with one click! 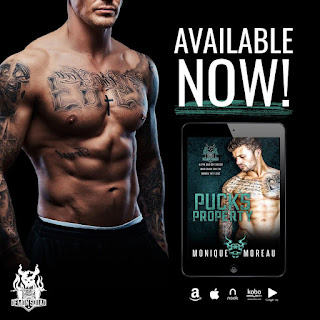 MY IMPRESSIONS OF THIS BOOK:
As a fan of MC-themed romances I was immediately drawn to this story, its immensely appealing main couple, and their crackling romance that kept me glued to the pages through their emotionally intense journey to HEA.  From the outside this couple look to be opposites but a foundation built between them in the past promises to give them the HEA they so richly deserve as adults in this powerful tale.
Puck's the quintessential bad boy.  From his youth of partying hard (where he first met and bonded with Ava) to an adulthood that saw him in an MC and doing penance for a single act that's changed his life irrevocably he's an unforgettable hero...a bit tarnished but still worthy of the label.  When readers first meet Puck they see someone raw and gritty, someone loyal and hardworking, vital to his Club and always able to get the job done.  He's strong, sexy, and dominant both in and out of the bedroom.  Behind that bad boy facade though is someone with a big heart, someone sworn to protect others...and he's never forgotten Ava despite their years apart.  When she's assigned as a social worker at the prison he's serving time in he's determined to make her his.  It's not an easy task to woo her from behind bars but somehow he manages it in a tale full of twists and turns...as well as lots of steamy encounters.
Ava's a likable heroine, one who I could see being friends with.  She's had a difficult life courtesy of her early years revolving around parental drug abuse, to a broken heart courtesy of Puck that still weighs on her today, but has proudly overcome it all to make a life for herself.  Their years apart has seen her grow stronger, seen her get a degree, but despite saying she's over Puck she's clearly not.  From the moment they reconnect the fireworks are unmistakable as they engage in a battle of wills that grows hotter with each turn of the page.  There's a lot of baggage between them, a lot of past hurts that they need to work through if they hope to have something more between them.  Not only are there personal struggles to deal with, but there's outside forces seeking to keep them apart and an individual wanting Ava as their own in a sexy and suspenseful story that kept me on the edge of my seat.
Though this is the fourth installment in The Demon Squad MC series it can stand strongly on its own courtesy of its appealing main couple, combustible romance, intense emotions, and a storyline that kept me guessing through every new twist and turn. After reading this installment though I'm left wanting to go back to read the others as the world Ms. Moreau has crafted is an exhilarating one with characters that jump off the page amidst romances that deal with the body and soul.  Readers will be in for the ride of their life with this new release that has me looking forward to what comes next!
My rating for this is an A-
*I got this book from the author for review in exchange for my honest opinion. 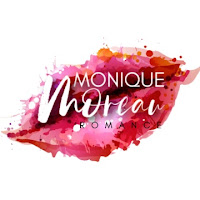 AUTHOR INFO:
Growing up in New York City, I used to walk the hot pavements in the melting heat of the long summers, and dream. Uptown to downtown, eastside to the westside, and underground to catch a subway racing out into the boroughs.
During my wanderings, my magic pencil spun out fantasies full of romance, with first meetings, heartbreaks, and reunions. Sometimes my boy crush (unrequited, of course) starred as the hero.
I grew up, and after a stint in art school, became a lawyer ‘cuz a woman’s got to make a living. I came from parents who fled to France as refugees, and as an attorney, I dedicated my work to helping survivors of trauma and persecution.
I believe in them. In their grit, in their determination to hold on, to pull through and, somehow, someway, to keep themselves intact, body and soul.
Perhaps that is why I am drawn to writing stories of men and women who live through heart-rending pain, desperate yearnings and, ultimately, reach a place of redemption.
For a long time, I fought the urge to veer off the expected, safe path until I couldn’t go on unless I took a chance and made a change. I began to write, stopped, and began again. Finally, I gave in and here I am.
Come join me on my journey…
AMAZON AUTHOR PAGE  |  BOOKBUB AUTHOR PAGE  |  FACEBOOK AUTHOR PAGE  |  GOODREADS AUTHOR PAGE  |  INSTAGRAM  |  WEBSITE
at January 21, 2021