Book Spotlight on Forever My Cowboy by June Faver (GIVEAWAY)......

A man comfortable with his life finds himself suddenly parenting his niece and nephew...with the help of the children's aunt.  It's a combustible connection between them that soon turns romantic in a romance full of sexual tension.  Keep reading to get a tempting taste of Forever My Cowboy by June Faver, then start counting down the days until this book hits shelves on January 26th.  in In honor of this second installment in the Garrett Family Saga make sure to fill out the form below for the chance to win 1 of 5 copies of the previous book in this series too! 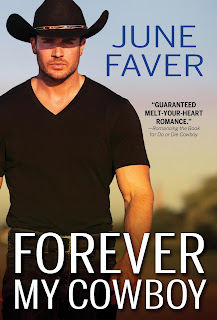