A strong and sassy woman finds herself teaming up with an ex-military man in this action-packed tale that will keep you on the edge of your seat.  Keep reading to get a tempting taste of Walking the Edge by Sue Ward Drake, then add this exhilarating romance to your bookshelf.  In honor of this first installment in the Danger in the Big Easy series make sure to fill out the form below for the chance to win 1 of 5 copies of this book too! 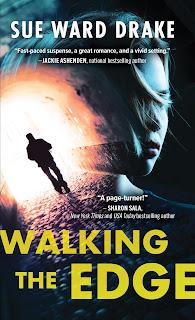