Readers will find themselves quickly captivated by this battle for love and country that beautifully blends history with fiction to craft an epic historical romance.  Keep reading to get a tempting taste of Truly Madly Plaid by Eliza Knight, then add this highlander-fueled tale to your bookshelf.  In honor of this second installment in the Prince Charlie's Angels series make sure to fill out the form below for the chance to win 1 of 5 copies of the first book in this series too! 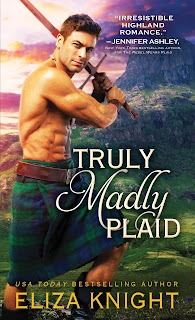